Busy weekend, but I did manage to keep to the schedule… by applying varnish to my last four Bloodletters before climbing into bed last night. 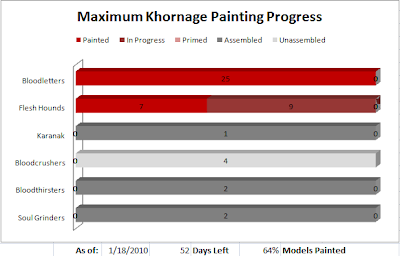 So, I’m done with Bloodletters!  (Well, until I get to the Bloodcrushers, but that’s different.)  I’ll have to get some pics of all of them up in the next day or two.

This upcoming week’s looking a little packed, though, which means I’m going to be hard-pressed to get through half of the Flesh Hounds I need to have done by Sunday, much less all of them to be on schedule.  Best to make peace with that fact now than be frustrated Sunday night.  There’s room for slippage in the schedule, though.

Should be getting in my first game of the year this afternoon.  It’ll be, effectively, my first game against the new Imperial Guard (remember, I spent most of 2009 fooling about with War of the Ring and Warhammer Fantasy), and it’ll be against Jeff L. who is, to understate, a very strong player.  Although I might as well log the game as a loss now, it should still be a good game.

This past Saturday was the IFL‘s first Swap Meet of the year, and I think I did quite well: managed to sell off the heaps of 5th Ed. Clanrats, my excess Sniper Drones, as well as some gaming books.  Left with a Chaos Lord on Juggernaut (which will eventually pull a Herald of Khorne’s chariot) as well as with a box of Cygnar Stormblades, as well as a couple of neat minis and useful bits.