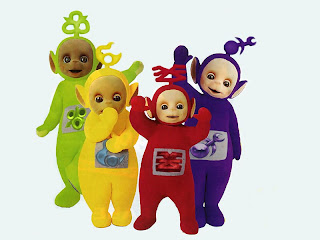 Themes: fast, pinchy, rending.  A successful result should like speedy and deadly, while remaining distinct from the actual Khorne units.
My plan for Daemonettes is either incredibly lazy or incredibly clever. I’m not sure. Basically, I want to just continue to roll with the Bloodletter body and replace the hands with Daemonette claws. 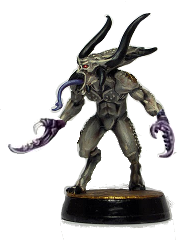 It still looks fast and deadly. It looks a lot like a Bloodletter (clearly) which is good, because 1) the Bloodletters are easily the sharpest looking models in my army and 2) I probably won’t take any when I start pulling in Plaguebearers and Daemonettes… but still different enough from a Bloodletter to avoid any confusion.
Fiends, I have got two ideas for.  The easy route (which means the one I’m likely to take) would be to use Dark Elf Cold ones.  I’d have to remove the saddles, which would require some sculpting, and might add bigger horns… but otherwise, that’s it. 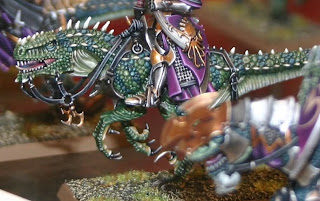 In fact, I’d been planning on doing just that for my Bloodcrushers (someone else did this, with amazing results, but I cannot find the link) until I started stumbling across some really amazing deals on actual Bloodcrusher models from different people.
Anyway, this is almost certainly the option I’m going to take.  It’ll also better facilitate converting up Seekers than anything else I can think of.
The other option, which isn’t really one (and I’ll come to why in a second) is to use the Mouth of the Abyss model from Hell Dorado. 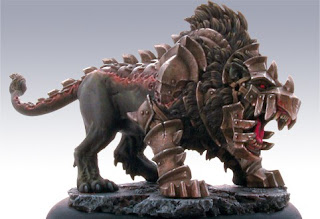 When I first saw this sucker, I thought, “Man, that would make a badass Juggernaut.”  Unfortunately, when time came to start up the Khorne army, I’d forgotten all about him.  I could always come back and use it as a Fiend, instead of a Bloodcrusher (it certainly looks faster than a Juggernaut, at least).
It’s a non-starter, though: it’s tough to justify $25 a model (vs. $25 for five Cold One models), especially when I’d be looking at a handful as Fiends and a double-handful as Seeker mounts.  Making this even more complicated is the fact that it looks like it’s backordered everywhere… so I’m not likely to find a second one (I’ve had one since it was released), much less eleven more.
Maybe I could have him pull a chariot?  Probably not.
Seekers of Slaanesh will be utterly straightforward: Daemonette conversion sitting on a Fiend conversion.