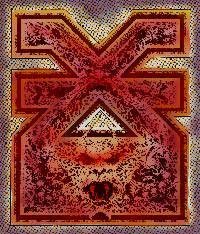 I’ve gotten several more games in with my Daemons over the past few weeks and have, for the most part, done quite well with them.

In fact, until last Tuesday, I hadn’t seen anything worse than a well-fought, skin-of-the-teeth draw. Tuesday saw two completely one-sided games: one in which overly-aggressive deep strikes and incredibly unfavorable scatter rolls helped John beat the living tar out of me and one in which everything in the army clicked together like clockwork and I steamrolled over Sean.
I’ve done some thinking about what’s gone into my army, and have toyed around a little bit with it as I’ve gone along. Now’s as good a time as any to document it.
HQ
The Bloodthirsters are great. Even when they’re swinging for 6’s on a Eldar skimmer, I never feel like they’re being wasted. In my game against John, I wished I’d shelled out for Unholy Might, since it would have let me squish Pedro Kantor like the mortal bug he is instead of getting sucked into a three-round tickle fight… but 20 points is an awful lot to spend and it pushes the ‘Thirster up to nearly 300 points!
I’ve yet to really use any of the Heralds (Skulltaker or one of the generic Khornate heralds). They look like they’re pretty killy for the points (especially Skulltaker on a chariot), but come at the cost of my most effective anti-tank unit: a Bloodthirster.
Elites
I’ve yet to run Bloodcrushers, but I’ve got a stack of them to assemble. At first, I dismissed them as not giving me anything Bloodletters didn’t already give me, but that’s because I didn’t truly appreciate how nice that 3+ regular save is. I’m looking forward to running a few of them.
Troops
Bloodletters are where I do the most waffling. I think I have a clear feel for what works well with pretty much all of the other Khornate choices… just not Bloodletters.
In small groups, they die too easily. In large groups, they’re overkill. Without Fury of Khorne, they don’t stand the slightest chance against a walker. With Fury of Khorne… they stand the slightest chance against a walker. When I give them Icons, I don’t need them. When I don’t, I do.
The only thing I do know is that I don’t expect to ever need to give them Instrument of Chaos.
I’m also playing around with how many I deploy. When I first started working with the army, I’d drop 40 of them on the table (five squads of eight each). That seems to be overkill, but it has been working better than the three squads of eight that I’ve been running.
Next, I’m going to try a large squad (of sixteen) and a small squad (eight), each with an Icon. We’ll have to see.
Fast Attack
These guys get poo-pooed by other folks I know who run all-Khorne daemon armies. “They cost nearly as much as Bloodletters,” I’m told, “but they’re not Troops and they don’t have power weapons or WS 5.” This is true… but I’ve yet to have Bloodletters be anywhere nearly as useful as Flesh Hounds.
The speed is the key. Fleet, plus the 12″ charge range gets them engaged and very, very quickly. They fight like Chaos Marines / Assault Marines, and that’s nothing to complain about. At the very least, they do well locking up units while nastier things (like Bloodletters) close in.
I’ve recently started giving them Fury of Khorne, and I’m very happy with it. It closes the gap a little bit between the Bloodletters and the Hounds. I’ve also been happy with Karanak, though I think that if I ever need to shave points, I’ll drop Fury of Khorne in the unit that gets Karanak (since he comes with it as well).
Heavy Support
I’ve yet to really use Daemon Princes. I put one in the list I used on Tuesday as a points sink, but it didn’t really get the opportunity to succeed or fail. It’s slow, though, and it costs too much to buy Flight, so it seems like it’s a poor choice… unless I’m running three of them.
And why would I, when I love Soul Grinders as much as I do? The model is awesome, and it’s never really disappointed me. Fleeting into combat is a treat, and does a great job of locking up squads that can’t hurt it. The close-range shooting is utterly devastating to 4+ save armies. I’ve also had a great deal of good luck with Phlegm, against 3+ armies. AP 3 Large Blast makes me feel a little guilty.
For the most part, I’m pretty settled on the things that I think work, save for how many Bloodletters I should invest in, and what I do with the points I have if I spend less on them.
In terms of getting the army together, I’ve got to assemble those Bloodcrushers and settle on a paint scheme. I’ve got some thoughts, including a non-traditional scheme that should look awesome if (and only if) it actually works. I’ve written of August to work and vacation, though, so at the rate I’m going I’ll start painting them in December.
The list I’m currently planning on using is: