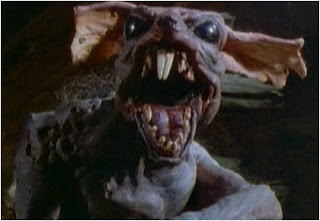 Today’s another breast cancer charity tournament: this time Warhammer Fantasy instead of 40K.  Should be a good time, though likely smaller than the Battle for the Cure tournaments we’ve done at Game Vault.

I won’t be fully painted, and I don’t have a unit painted pink to compete in that particular category, but I think the Rats for the Cure mini I knocked out a bit ago will do well in the single-mini category. 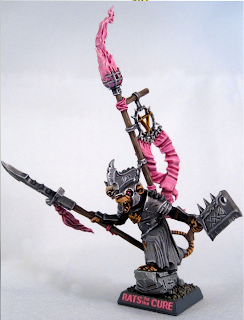 Games are at 2,000 instead of 2,500… which is a size I’m not really used to, but makes sense given the schedule we’ve got.  I’m trying something new to make the list I know how to play work with 500 fewer points:

Clash for the Cure

I tend to keep my Core expenditures as close to minimum as possible: so, no more Clanrats.  Instead, I’m running a pair of small (tiny, really) Stormvermin units with Mortars.  I expect this will not work at all, but I’m giving it a stab.

Similarly, there’s no Hellpit.  No Warp-Lightning Cannon.  As poorly as the latter’s done for me (the last few games I’ve played, I’ve misfired something like 90% of the time), I should be more comfortable with that decision.  We’ll see.

No Power Scroll, but that’s ’cause it’s explicitly verboten.  Suppose I won’t necessarily swap out for The Dreaded Thirteenth, then.

I’m beefing the Gutter Runners up from 5 to 6 because I’m incapable of arguing with Harry’s logic about how many casualties it takes to force a Leadership test.  They don’t take them often, though, so I might go back to 5 ninja rats after a few games.

I’m planning to have a time and I hope we raise some money!  I’ll probably be taking pictures and commenting on the Twitter throughout the day… at least I hope to.