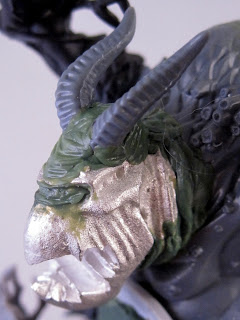 So, in my Storm of Magic list, I’m taking a Fimir Balefiend: Shadow’s a pretty happy lore.

I’d considered just cracking open my copy of HeroQuest; there are a handful of Fimir Warriors in there. But Casey pointed out that they’re a little small.  According to Wikipedia, initially (and when HQ was published, Fimir were man-sized… but then an ogre-sized sculpt was done at some point and it’s clearly had an impact: in Storm of Magic, they’re Monstrous Infantry.

So, I converted one. 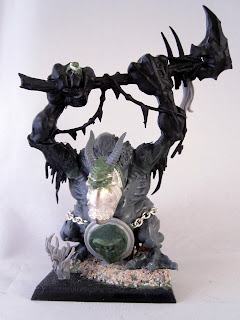 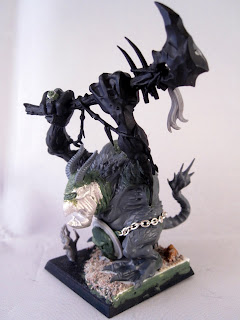 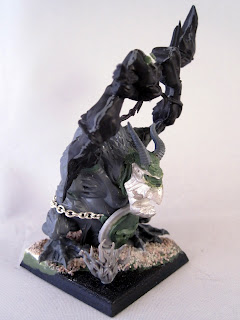 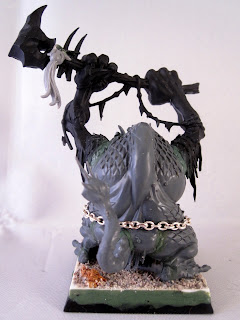 The base, as is probably clear, is a River Troll.  There’s a Chaos Spawn tail on there, which was kind of a no-brainer. 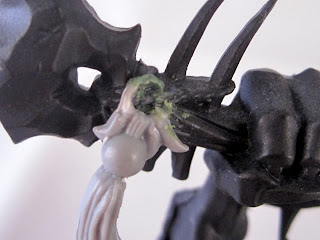 I rolled the dice and bitz-ordered the Troll: unfortunately, it didn’t come with arms that would work at all.  I was lucky enough to trade them to a club member for better arms, though.  I thought they needed a bit more, so I stuck on an old Skaven banner bit to (hopefully) breakup the shape and make it look less like River Troll arms.  Same thing with the ring.  The sculpting there to make that banner bit fit?  The hardest part of the dang conversion.

The head is from a Krootox; the eyes and brow were drilled out and resculpted into a single eye.  The balefiend has horns, so I used some Gor horns I had left over from a Daemon conversion.  To make them fit, and to sculpted him a bigger head (since I’d list the three most distinguishing features of the HQ Fimir as single eye, club tail,  and big head).  It’s not huge, but it’s a lot bigger than it was, and it should be the right size for the model now. 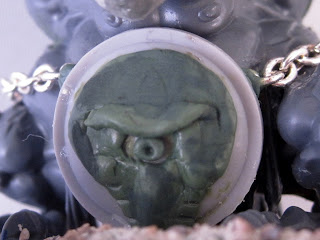 And, just as I thought I was done with it, I realized that it needed a gutplate.  From day one, the lack of clothing had bothered me: Fimir are civilized (under certain definitions for the word) and wear clothes and armor, but I couldn’t figure out how to sculpt something on that would work.  Then I realized that Fimir have always had gutplates: that’s easy enough to do.  I sculpted a stylized Fimir face on it: I don’t think it’s photographed well, but it should paint up okay.

I’m leery of the chain: I don’t think it works well… but I think getting it to hide under the Troll’s rolls (which is what it really needs) is beyond my skill.

Anyway, I hope to have it done and painted before tournament in case I end up ringing.

Of course, I was 90% done with this (just tracking down an appropriate set of arms) when ForgeWorld posted theirs: 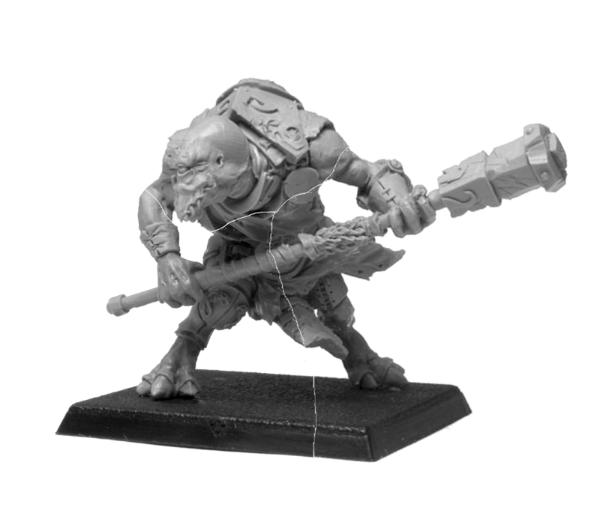