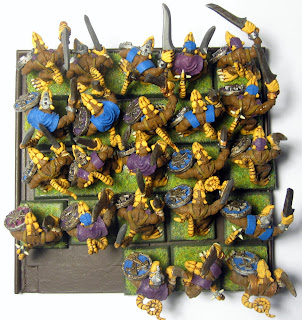 In pulling together a “things that drive me nuts” post, one of the items in the list was “Lopsided Rear Ranks.”  The above unit’s an example of this: the models in its rear rank aren’t centered across the unit.

When I’d see this, I’d say something like, “Come on, man; you’ve got to center your rear rank.  It matters for supporting attacks, templates, charges.  You’re just supposed to be centered.”

Well, as it turns out I was totally wrong.

Removing Casualties (pg 5)
Some of the models in a unit (probably quite a lot of them) will die as the battle progresses.  When casualties occur, models are removed from the back rank of the unit.  If the unit is reduced to a single rank, casualties must be removed evenly from either end of the line.

You only have to start keeping things centered when you’re down to a single rank; until then you can pull from wherever the heck you’d like.  So, the above formation is just fine.

I imagine that means that if you want to shift guys to the left or right (without being charged in the flank), you probably need to make a Combat Reform test, but still…

Anyway, I just learned something new and I’d been doing something wrong: of course I had to share it.