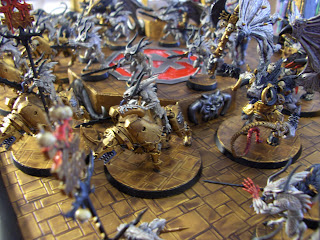 Painting happened faster than I expected: as tedious as the edge highlighting on the stones was, it only took a couple of episodes of Deadliest Catch to blow through.

I airbrushed the whole thing brown; craft paints, a tone that was pretty close to Bestial Brown.  I wanted it to look just like the bases on my models, so I hit everything with a very, very heavy drybrush of Shining Gold.  Then, I picked out the edges with Burnished Gold. 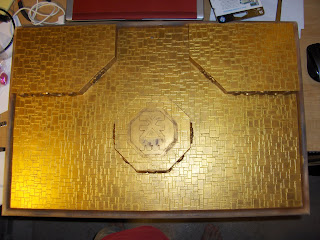 I smeared Devlan Mud across the whole thing.  That ended up looking like crap, so I went back and brushed Devlan Mud into the cracks, with better effect. 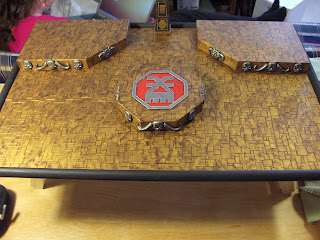 Faces and the Khorne symbol are Boltgun Metal with Mithril Silver highlights and Badab Black.  I decided at the last minute to paint the area around the symbol red (Scab Red basecoat, several very thin layers of Blood Red); originally, I had planned to leave it brass.  Water Effects make the blood work really well, I think. 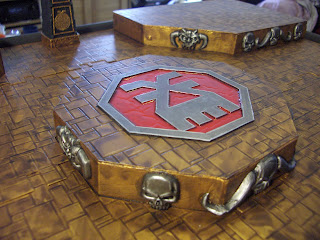 Nothing special here.  The obelisk is done the same way, except the stone is black with Coal Black highlights. 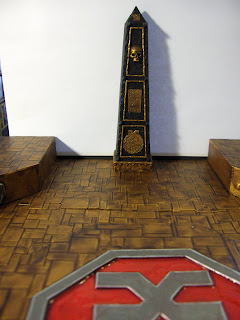 Finally, what’s the point of a display board if you’re not going to put minis on it? 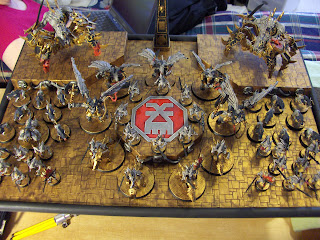 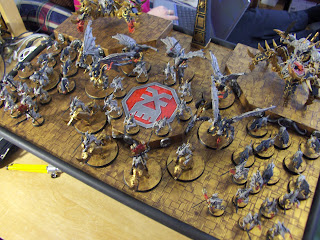