I’ve pretty much decided on running Skaven at the NoVA Open (tickets for the Fantasy side of things have not gone on sale, yet).

I’ve been telling myself all year that I’m going to try to get the list that I’d been playing fully painted before doing anything drastic (swapping units, etc) with the army.  This should push me to really drive to make that a reality.

The list I’m planning on running (with room for some mild tweaking: item swaps, an extra couple of bodies– but not more than that):

The army’s not, done but it’s close.  So very, very close.  I’ve plugged everything I need into the same sort of Excel sheet I used last year to track my progress with my Daemons.  There are some notable differences: I’m using Google Spreadsheets instead of Excel, for one.  Even more significantly, a very large portion of the work ahead will involve rebasing already painted minis: I’ve got a number of models based on generic static grass bases (seen here), but have done all of my newer models in the more interesting, display board friendly, cavern scheme. 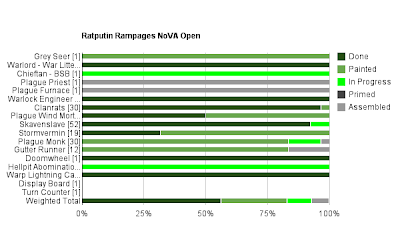 So, while I’m 56% done, I’m actually 83% done if you ignore the need to rebase 50 models.  I’d be even farther along, I suppose, but most of the stuff I have left to do are big things: the Abomination, the Furnace, the display board.

I’m going to wrap up what I’ve started with my Deathwing (Belial III, Whirlwind Turrets x2) and I’m going to set back into this.  Wish me luck! 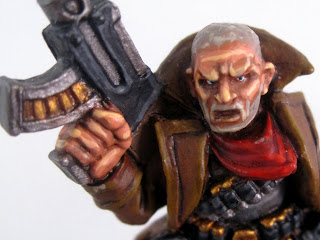 I’ve been kvetching about how I need a lightbox for quite some time, now.  Just as I figured out how to take really great pictures with my crappy old digital camera, I decided to treat myself to a new, much nicer point-and-click.

The new camera takes much better pictures… of everything but miniatures.  I’ve attributed this to really terrible lighting conditions when I take those pictures… something a light box should be able to remedy.

I finally got around to ordering one of these off of eBay.  It showed up in record time; I’d played around with it a bit but hadn’t really had the chance to use it to actually take pictures until this weekend. 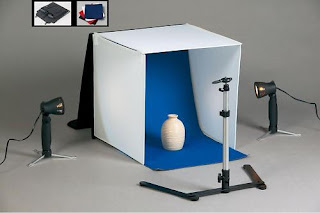 The results are decidedly better.  I’m quite certain that there’s some room for improvement (I think another light & diffuser would help, as would some additional camera configuration), but we’re looking at Much Better.

Before I get into the actual pictures, it’s important to note: I run all of this stuff through Picasa.  My process is to take 3-5 versions of each picture I want and then keep the one that looks the best. Then, I open it up in Picasa, click “I’m Feeling Lucky,” and maybe crop things so the composition is a bit better.  Commit the changes and call it a day.  That’s how I did it before the lightbox and it appears that that’s how I’m going to have to continue doing it afterwards.

Here’s a Vampire Priest to show why I do this.  The one of the left is before Picasa, the one of the right is after: 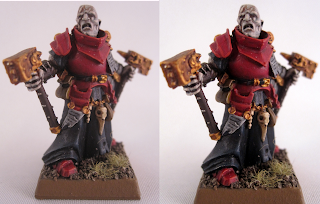 See why I do that?

Anyway, here are some comparisons of photos I took before and after the lightbox.  Before’s on the left.  After’s on the right. 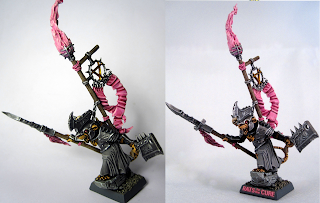 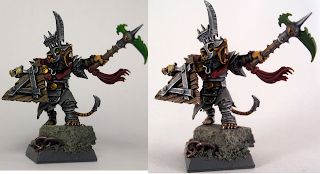 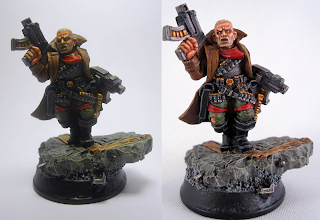 In each case, the photographs’ much clearer and brighter.  It does a better job of showing off the miniature.

Here are some more photos of older stuff I took in the lightbox: 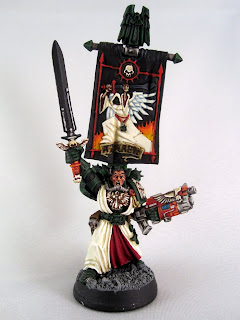 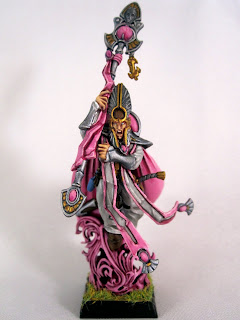 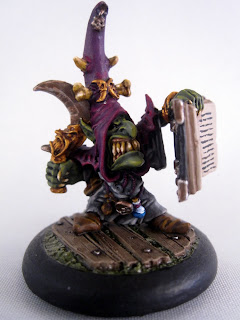 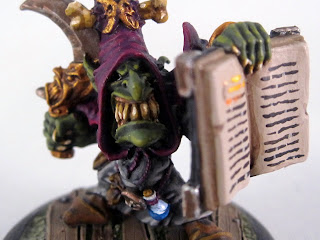 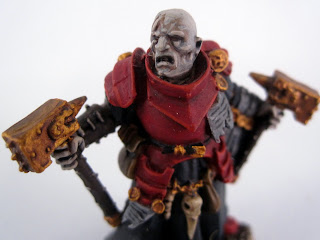 So, I definitely think this has been worth it.  What do y’all think?

On a related note, since I’m talking about photography… I’ve started trying to mix up the sort of pictures I take.  While I’m continuing to take the pictures that showcase the overall miniature, I’ve tried talking pictures that are better composed: more dynamic pictures that objectively work better as pictures as opposed to the neutral presentation ones.  The last two above, as well as the first picture in the post, are examples of this.  Do y’all think these work? 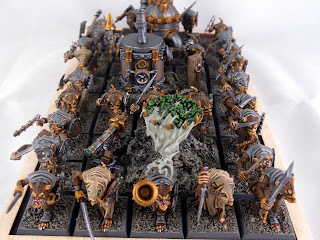 As might have been made clear by yesterday’s post, I’ve been feeling a bit of hobby related-ennui.

Friday I decided, “Screw it, I need to paint something.”  So, I grabbed the Unit Filler I pulled together back in February and started working on it.  Saturday morning, I decided I hated it on the 40×40 bases; I made some 60×40 bases then moved the filler over and expanded on it a bit.

Finished it this morning and varnished it.  Here it is: 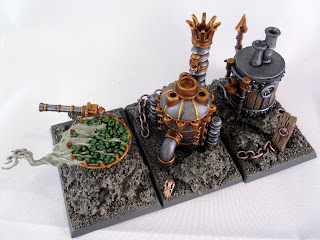 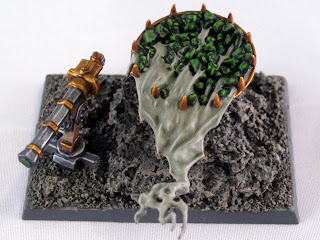 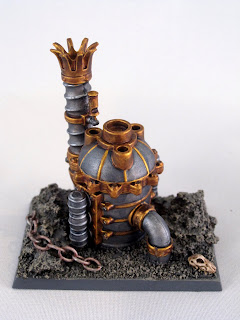 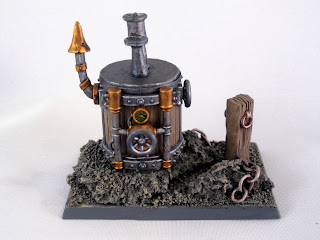 Filling in for 6 Skavenslaves apiece, I’ve still got to paint 2 more Skavenslaves to field the full unit of 50.  I’m okay with this, since 2 is substantially less than 20. 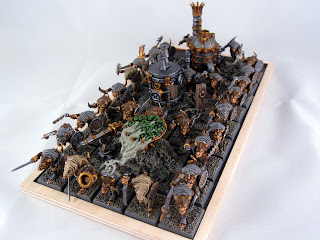 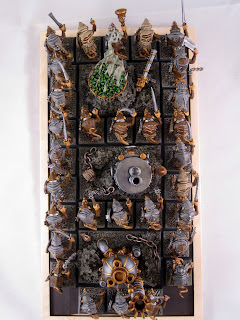 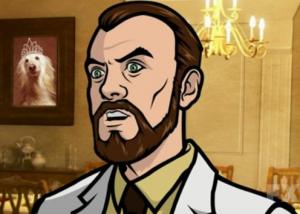 Apologies for the quiet ’round here: haven’t have much going on, so there’s not much to say.

I dropped out of the Warhammer Fantasy campaign we’ve had going for the past couple of months: it’s felt like work for the past month or so.

The short version is: two guys (one of whom I know to be a cheater and refuse to play) took unfun lists and allied with each other.  On the first day of the campaign, one of them attacked another player who (literally) said, “Not worth it,” and dropped.  So, the rest of us allied to try to keep them from steamrolling: we didn’t want to give them the satisfaction, you know?

I was well-positioned to tie up the other guy.  So, that’s what I did.  It became clear that I was going to play the same game with the same list against the same opponent’s list from now until the campaign wrapped up.  It didn’t take me long to get burnt out on that.

And, to make things even easier, we caught the guy I’d been tying up doing dishonest things with his list in our last game.  Really the worst possible note to end things one.

Question, regarding my hobby status sheet: should I bother logging a game in which the other guy was cheating?

So, I’m a little sick of Fantasy right now, which is a damn shame.  I’m not far from having my Skaven there, you know?

I’m having a hard time getting excited about playing it, though.  My Daemons don’t like they’re going to fare well in a post Grey-Knights world.  I still don’t understand my Tau in 5th (and keep hoping they’ll get a new book so I won’t have to).  That leaves my Dark Angels, who got a huge shot in the arm via the updated FAQ… except the list the FAQ really benefited isn’t exactly the list I want to run: Deathwing got a lot better, but I still kinda just want to run Battle Company Dark Angels who are so bad, even “Rank the Codices” lists that everyone loves to do almost always forget to mention them entirely.

Anyway, that’s enough whining.  It might not be quite the list I want to play, but Deathwing’s viable and will give my friend who’s been learning to play 40K by way of playing nothing but (not my) Daemons something new to go up against.

So, this is the list I ran on Tuesday.  It’s pretty much exactly the list Casey‘s suggest I run:

It did well, despite my dice not really cooperating with me.  I’ve got some work to do pulling the models together for this: my command squad’s currently heavy on Lightning Claws, and I need to assemble a few more TH/SS terminators.

(I also need to figure out if I want to run the CML on one of the TH/SS brothers or on one of the PF/SB brothers.  I’m pretty sure the former’s better, but the latter involves less work.)

So, this thing‘s on the horizon: about four months out.  I’m not really excited about it right now: I’ve gotten extremely burned out on the idea of Competitive play (capital “C”).  Every time I think about the cash prize I facepalm and start dreading shitty, unfun games… because now there’s actual cash on the line.  Given my recent experiences with the campaign, where nothing has been on the line I think my pessimism is pretty justified.

Furthermore: I’m not sure what I’ll want to do with it.  My Daemons are my most visually impressive army… and I’ll go farther on looks than talent with this thing if you know what I mean.  I’m spinning up on my Deathwing, though, and I think it’ll produce more satisfying games.

At the same time, my Skaven are coming along badass, and could conceivably be finished by August. I’d have to sell / trade my 40K ticket for a Fantasy ticket… but that’s probably more feasible than going from Fantasy to 40K.

Anyway, I’m starting to think about it.

EDIT: It looks like I was conflating two things: the NoVA Open (that I have a ticket to) and the NoVA Invitational (that, let’s face it, I’m not getting an invite to).  So, no cash prizes.  I’m still writhing in the throes of existential hobby disappointment, but the threat of money isn’t contributing to it.

After bitching about needing a lightbox for something approaching a year: I finally grabbed one off of eBay.

I’ve played around with it a bit:  I’ll have some photos taken in it up in the next couple of days. 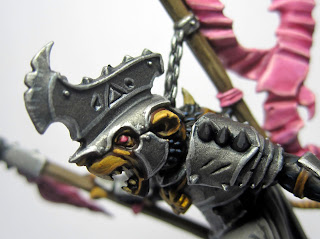 After painting the Clash for the Cure High Elf, I kinda felt like I was on a roll painting pink.  It’s so striking.  It’s bright and pops out at you: the vast majority of models out there tend to be dark, drab and (frankly) boring to look at at table-distance.  Even my Skaven are starting to run that way, you know?

So, that obviously let me into painting up a counter piece to the elf: the Skaven Warlord from Island of Blood. 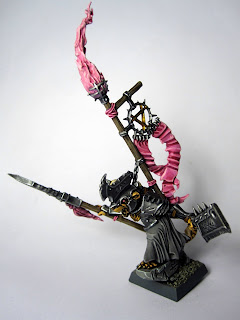 There’s not nearly as much pink on him as there is on the Elf, but I think it’s a little more interesting.  Each pink feature’s a little different in the way I pulled it together. 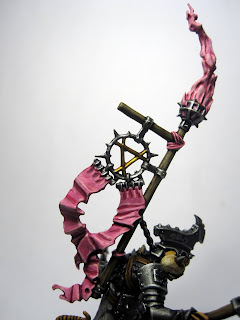 I still need to paint something on the banner: I need to figure out what.  It’ll either be a glyph-like ribbon symbol, some sort of runic “FUCK CANCER” or “RATS FOR THE CURE” (which I think is brilliant).  Probably some combination of that.  I wanted to get the model varnished first, though: so I could paint whatever without worrying about wiping off work and so I could go ahead and photograph the mini. 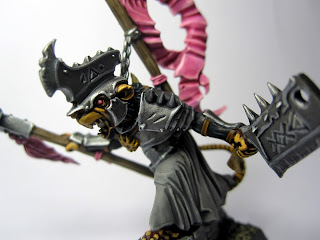 He’ll probably go in as my BSB at the Clash for the Cure.