What I hoped to have done Sunday didn’t really get finished until last night, plus actually doing the icon slowed things up just a hair.

I’ve also realized that I have 3 octets and 3 models with Fury of Khorne (with the big ol’ Khornination symbol on the forehead)… but I’ll only be running two squads.  That means I’ll need to paint up an extra Bloodletter, putting total needed at 25, not 24.
That puts me at: 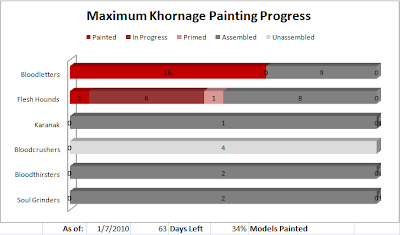 If I’m lucky, I’ll spend a little time today researching how other people have handled the Bloodcrusher conversion issue.
* This is actually a small lie: I still need to highlight the skulls on the icon with white and then wash them with Devlan Mud before varnishing all five.  It’s close enough, though.
** Why six?  Because I already have one done.  I’d primed seven, but dropped one and its damn horn popped off and shot… I have no idea where.  Not just a little frustrating.