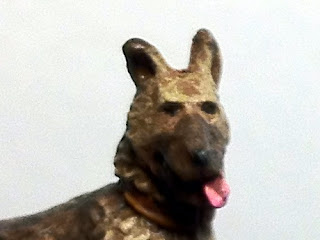 Progress painting the Empire has been slow.  Despite taking a week off from work for a much-needed staycation (and even spending a morning camped out at GW Fair Oaks to force myself to focus on painting), I’ve somehow managed to remain too busy to paint.  And, when I’m not too busy, I’m running into the “bit off more than I could chew” wall that grinds progress to a halt. 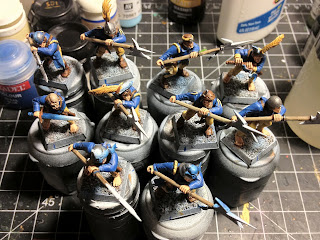 It’s madness to think I’d originally considered tackling these bastards in batches of 15.  10, as with Skaven and Astartes, is too big of a batch for me.  When I finally wrap these guys up, I’ll go back to doing batches of 6-7, which seems to be my sweet spot between “as many as possible” and “quick accomplishment fix.”
These guys are close.  I need to do metallics (obviously), then red items, then base them and I’m done.  It’s totally doable.  I just need to do it.  Shut up and paint, bro!
Partly because the next session’s coming up and partly because I need to feel like I’ve accomplished something, I knocked out my D&D character.  He’s not done-done: he still needs some Dullcote before I can claim that, but that’s all. 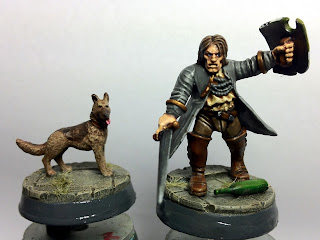 He’ll get better lightbox pictures after that.  I’m happy enough with him.  He’s basically a Free Company dude (as uninspiring as those guys might be on the table, I love the minis) with a Greatsword head and a Swordsman shield.  The dog is from Warlord’s Unleash Hell; bases are from Dragonforge’s Sanctuary line.
Beyond that, I seem to still have a ton of assembly hobby work that needs doing: I need to assemble another Mortar, have to convert up a second Arch Lector of Manann, I’ve got a bunch of metal squares from Wargames Accessories that need filing down (so my Greatswords have heft), and, as soon as they show up, I’ll have to glue together some movement trays from Litko.
(One final note: I need to give a huge shout out to Back 2 Base-ix: since placing my as-yet unreceived order with Litko, I’ve placed and received two orders from Back 2 Base-ix… and they’re shipping from Australia.  They’re amazing: I definitely plan to continue ordering from them.)