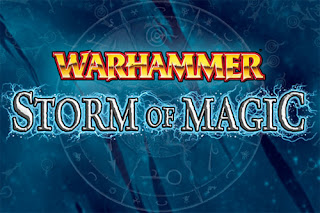 I might have mentioned that I’m running a Storm of Magic tournament in January: more to motivate folks to give the dang format a try.  The book came out, folks (myself included) bought the book, the cards, Arcane Fulcrum kits… and then never did anything with them.

So, between that, my actually painting some Fulcra, and Eric McK making the call to let folks spend 25% of their points on random Forgeworld & Storm of Magic choices at the (very successful, non-Storm of Magic) Toys for Tots tournament earlier this month: I decided to go ahead and get something on the schedule.

Key is trying to make accessible to folks who felt like paying who weren’t chumps who’d bought the book or felt like playing with the Scrolls of Binding and such.  I’m a fan of inclusive.  So, the format’s 2,500 points: percentages are based off of that (so, 625 minimum Core, 625 maximum rare, etc), and lists can spend up to 500 points on SoM choices (because in SoM you get an extra 25% to spend on those things, we can pretend you’re running a 2,000 point army).  Those SoM choices are totally optional: if someone wanted to show up with their usual 2,500 point army… they’d be fine.

I finally got the chance to get a game in last night: when SoM first came out, I pushed miniatures around the table with Sean for a few hours while we had the book open nearby, but I don’t think that counts.  So, my game with Casey was my first serious attempt at a SoM game. 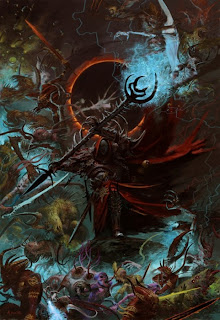 I ran my usual Skaven list (the Empire’s still being assembled), with two Grey Seers instead of the Seer and the Warlord, and with two Warp-Lightning Cannons as my Rare choices (no Doomwheel, no Hellpit) and just one unit of Gutter Runners.  I spent my M&M budget on a Lvl 3 Fimir Banelord and a Chimera.

Casey ran a normal 2,500 point list: two units of Mournfangs, a horde of Bulls, a Slaughtermaster and a Firebelly.

I won’t do a turn-by-turn battle report, but I will do a braindump of impressions from the game… and that’s actually why I’m writing this post:

I’d definitely like to see us (locally, at the very least) adopt Eric’s 25% “random stuff” budget.  Cataclysm spells and Fulcrums aside, it’ll breathe some new life into armies that are starting to feel stale to their owners, open the door to clever and interesting conversions… and not be too bad, really.