I’ve made some progress… and had a setback.

I wrapped up Karanak in no time at all over the weekend. 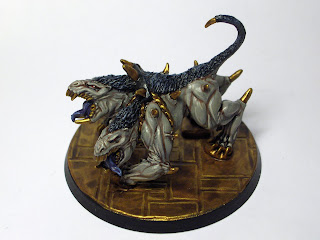 I can’t help but feel like I need to get him with a bit of blood somewhere, but I’m not quite sure where.  It’s low priority to me, though: I can always come back and do that later.  I’m also waiting on some more Rubber Steel to show up in the mail so I can transport him in the drawer.

As noted in my last post, I’ve started on the Bloodthirsters.  The model is… making it difficult for me to motivate myself to paint them, but at least it feels like I’m making progress on them… unlike the Soul Grinders which seemed to live at the “drybrush Shining Gold” stage for forever.  I doubt I’ll have them finished by this weekend, but I’d like to get them most of the way there by then.  That’ll leave me with the Bloodcrushers (and the Daemon Princes).

Last week, I’d mentioned that I couldn’t think of a good way to put wings on the Minotaurs/Daemon Princes. Conveniently, Casey had some Tyranid Wings he needed to get rid of.  That’s great, because it means my “Daemon Prince – Mark of Khorne, Death Strike, Instrument of Chaos, Iron Hide” x3 can become the equally unhealthily expensive but significantly more useful “Daemon Prince – Daemonic Flight, Iron Hide” x3.

I’ve already stuck one pair on one of the Minotaurs. 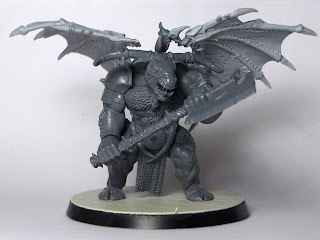 They went on with extremely little work.  A pin in each wing, plus a tiny bit of green stuff to smooth things out.  I think I probably still need to come back through and do a bit more gap filling with greenstuff, but I’m pleased. 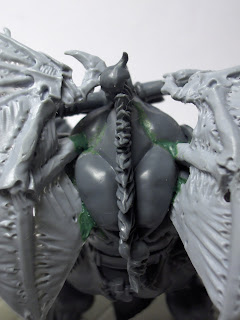 I did hit a minor setback last night, though: I got a game in last night (vs. Tyranids, got tabled) and, while bringing my stuff into the house, the foam tray with the Soul Grinders sitting in it (still need to do actual foam trays for transporting them) tipped over.  They fell, and some legs broke off. 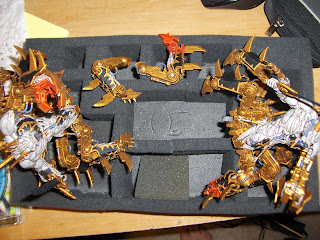 Repairable, but I’d rather it hadn’t have happened.

Anyway, progress from this morning (discounting the totally painted but needing-attention Soul Grinders): 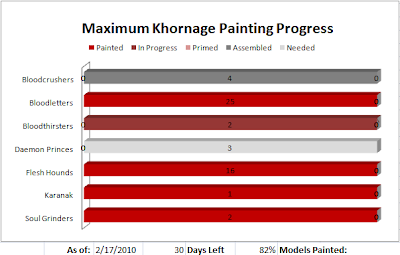