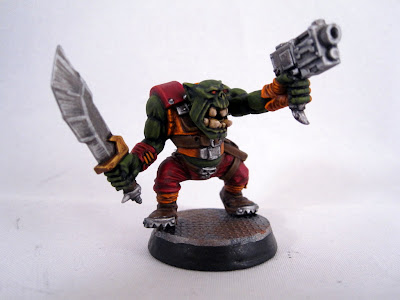 In an effort to take my own (and others’) advice, I decided to paint a one-off just-for-the-heck-of-it mini to help get out of the rut I’m in. After some fishing around my sprue bins, I settled on an Assault on Black Reach Ork. Like almost everyone else, I’ve got a few, and I haven’t really done much with them.

For the record, I’m extremely happy with the way I paint green flesh. I’d love to do an Ork army, and probably would… if there were fewer models involved. (How I’m going to reconcile that with the Orcs and Goblins I’m getting from the Mantic Kickstarter, I have no idea.)

So, I sat down and started on him. Then it occurred to me that I could/should give him to a coworker of mine (who we’ll call “Just Belligerent”) that I’ve worked with for a very long time that’s constantly harping on me to give them a painted “figurine.” 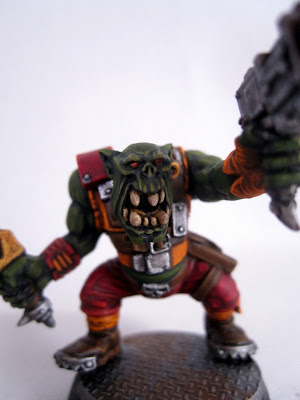 (As an aside: I get this… not infrequently. I always take it as a polite expression of interest in my hobby. “Would you give me a painted mini?” is how someone not involved in the hobby says that there’s value to what you do, that you’re probably good at it, and they don’t think you’re a thirty year-old manchild… and that they don’t really grok the cost or time investment this hobby sometimes demands.) 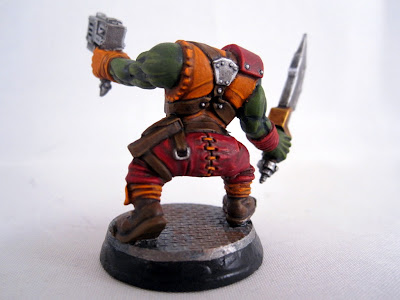 Anyway, that seemed like a nice idea. Then, it occurred to me that I shouldn’t just paint this guy as a standard Ork Boy. Given that JB is one of those folks who’s utterly obnoxious about their Hokie Pride… I could do better than black, checks, and dags. 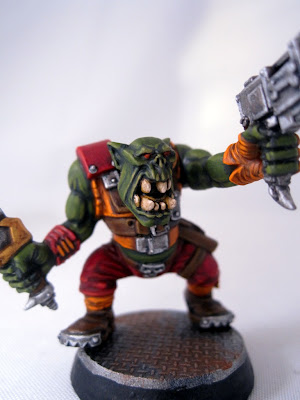 Obviously, I did the guy up in Hokie colors, which unfortunately makes him a Horkie. I suppose there’s an unintended insult in there (your school’s fans are eternally belligerent fungoid football hooligans), but it is unintended, and I don’t think JB’d catch it anyway.

I’m fairly pleased with how the colors came out. Bright, but still the right tones. 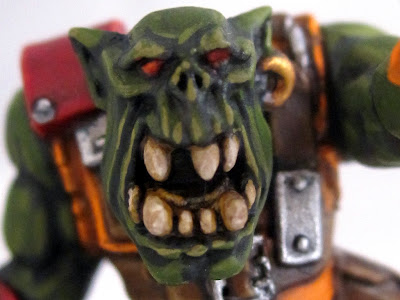 Of course, there are a couple of goofs on here that I’d fix, but I was pretty committed to getting this guy done in less than a day: the sloppy rivet above, a lack of color in his mouth, and I never did figure out the right way to fit 9-11-2010 into the model somewhere. I’m more disappointed about that than anything else. 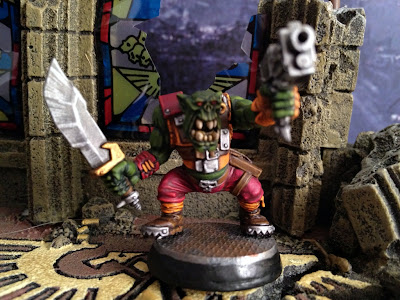 This HDR shot kinda sucks: I couldn’t get the camera to focus correctly. Still, I like taking them, so here it is.