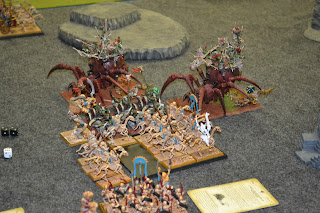 I ran a WHFB tournament over the weekend at GPC.

I think it’s safe to say it was successful: “full” at GPC is 12 players, max capacity (where people have to start playing on 5.5′ tables) is 16… we had 14 players.  Everybody seemed to have a good time and, with the solid turnout, prizes were good. 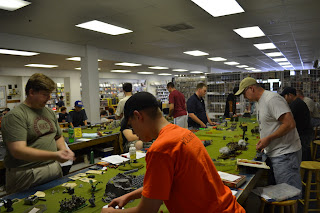 With the NoVA Open on the horizon, I decided to just use their composition rules (making an allowance for Chaos Dwarves ’cause we’ve got a player who’s running them), their first three scenarios (which were kinda  lackluster and a bit schizophrenic) and their bracketing (which meant we had two undefeated players at the end of the day). 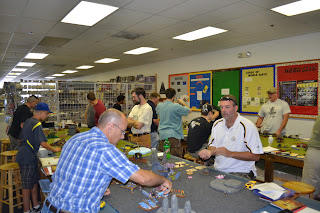 We had a ton of Orc & Goblin Players, which was kinda neat.  No Skaven, though. :/  Warriors of Chaos performed the best, with both WoC players going undefeated through the day.  Best appearance went, by popular vote, to Joey J.’s Daemons of Chaos. 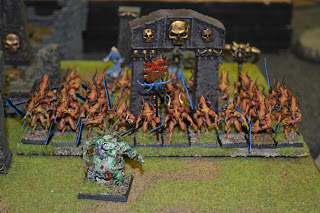 It was a long day, but we managed to pretty much stay on track throughout it… a huge accomplishment. 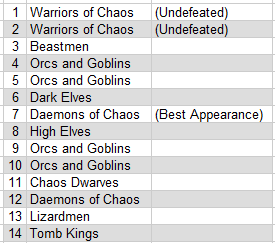 One of the local players took a bunch of pictures that can be found here.  (All of the pictures in this post are his.)

Something I really wanted to touch on was that I decided to take a risk that morning and run the tournament without a laptop.  Instead, I used just my iPad… and brought a pad of graph paper in case that didn’t work out.

It worked, extremely smoothly.  I had no trouble inputting results; because I was able to just walk over to a table where folks were working through their results, I’d say it was actually considerably easier than it would have been with a stationary laptop.

Tomorrow, I’ll touch on what apps I used.  I could probably stick them in here, but I imagine it’d be more useful on its own.