I’ve given up on painting my next quartet of Bloodcrushers.  It’s been a chore to paint them and if I’m honest with myself, I kind of resent the Daemon army at the moment, as if it’s Khorne’s fault I won’t be running them 8/14.

I did decide that I like my approach with the chariot.  I didn’t get much feedback, really: just Matt H. telling me that it looked off, possibly small.   The chariot itself is slightly larger than the Chaos and Tomb King chariots and is about the size of the High Elf chariot.  The perception could come from the FW Herald of Khorne being enormous. 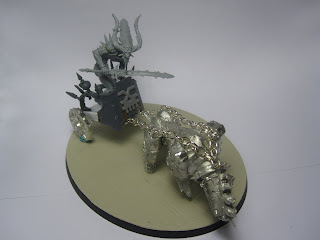 The chariot is a Defiler “knuckle” with a plasticard base and edges and spikes from the Chaos vehicle sprue as rails.  The Khorne symbol is from the same sprue.  The wheels are from a Chaos chariot.  I’d been planning on having plasticard struts connect to the shoulders of the Juggernaut, but Sunday afternoon I decided that would be hard to work.  Instead, I used some hobby chain I picked up years ago for some long-since abandoned project. I think it worked out pretty well. 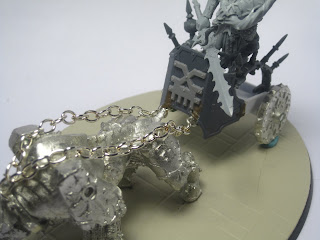 I will say, though, that painting this thing is going to be a huge pain in the genitals.  At least the Herald isn’t glued to anything yet.

Also, because I’m looking at returning to my Skaven (if I’m not playing 40K at the Open, why wait to return to Fantasy?), I finally stuck the Grey Seer on my Screaming Bell.  I wouldn’t call it done just yet, since I need to decide what I’m doing with the bell-ringer, but… this is a big step. 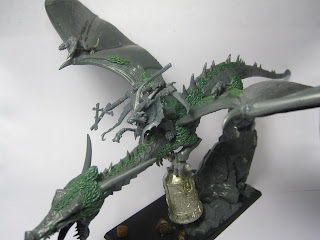 Basically, I clipped the front of the saddle off, and smoothed it down.  Ground out some of the area between the Seer’s legs to try to get him to sit more flush against the dragon before pinning it onto the saddle.  I used a little green stuff to pull its robes down and look natural (as opposed to just stuck on).

I also had to do a hand-swap, as the Seer’s left hand is supposed to be hanging onto the Bell, and there’s nothing for that hand to connect to.  Instead, I just used a sword/dagger hand from the Stormvermin sprue.  I like the result a lot.

Finally, I had to throw out my spray station.  I’m quite annoyed by this fact, since it was great and big and I’d been using it for several years.  A wasp decided to start building a nest in it, however, so it had to go. 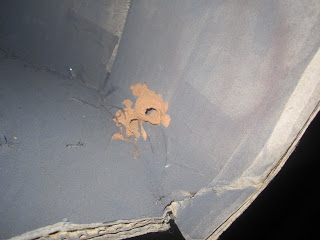 Coming up, I’ve got a lengthy battle-report to type up and post.  I’m also going to be focusing on my rats (over 40K) starting pretty much now.  That means I’ll probably start with finishing my half-painted Doomwheel.