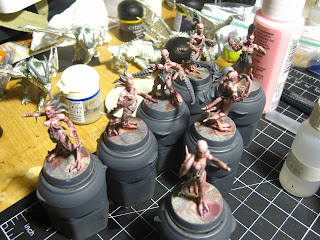 Past week or so, I’ve been jammed up, waiting on hobby time to make itself available and for some bits to show in the mail.
The bits finally showed up, so I made sure some hobby time presented itself.
First on the list was Skulltaker’s Chariot; I’d been waiting on some wheels to complete the chariot and the juggernaut to pull it.  All of that came together splendidly, until I realized I’d forgotten to order a base for the whole thing.  D’oh!  That should hopefully show up next week.
Tonight, while waiting on some code to checked in so I could compile it, I got the ball rolling on the rest of the Daemonettes.  (I think I’m going to call them “Bloodbrides” or something goofy.) 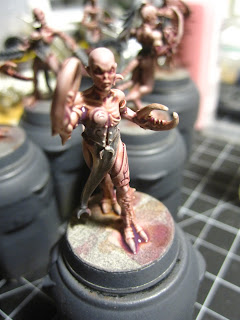 Speaking of Slaanesh: I’ve started on my first non-Khornate unit for my Daemons.  (The Daemonettes don’t count: they’re for the tournament only.)  I hadn’t set out to shift to an ecumenical list, but a deal turned up where I could buy two Varghulf for $10 each.  Ended up grabbing some other kits from the guy, one of which I was immediately able to turn around and trade for a third Varghulf.  One of those Varghulf turned out to have a fairly miscast arm, which meant a call into GW for a replacement.
So, with a good amount of greenstuff work, I’ll be fielding four slightly converted Varghulf as Fiends of Khorne. 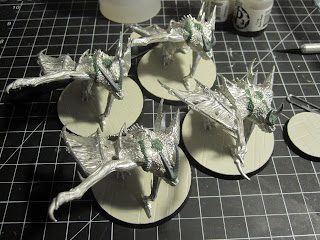 Not much going on here.  Because they’re so mono-posed, I wanted to do something to make them each a little more unique… and more Khornate.  I’m not entirely satisfied that I’ve made them sufficiently less mono-posed, but I think it’s probably the best I’m going to be able to manage.
Basically, I just stuck some Bestigor horns on their heads.  Lots of greenstuff work, though.  Tons of gap-filling, too. 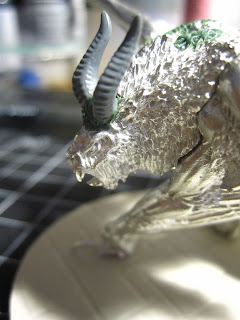 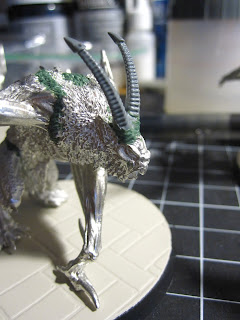