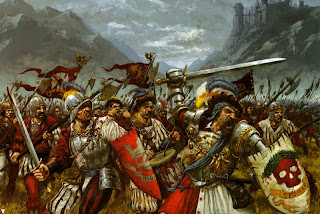 I got in a game with the Empire last night, running pretty much what I listed here (save that I dropped the Obsidian Amulet and an Archer and upgraded one Mortar to a Helstorm Rocket Battery), and went up a not-particularly hard Chaos Warriors list that looked something like:

A horde of 50 Chaos Warriors can be a tough nut to crack, but I didn’t have to worry about Gateway or anything, so I wasn’t complaining.

I was proxying damn near everything, so I got a lot of comments about how my troops looked like rats.

Overall it was a good, close game that I completely lost.  Some assorted, unordered thoughts to follow.

I’m going to fiddle with dropping the knights (though I should give them another chance) and seeing what else I can do with the points.

I’ve painted up the Helstorm (the weapon, at least, not the team): I’ll try to have some pics up soon.