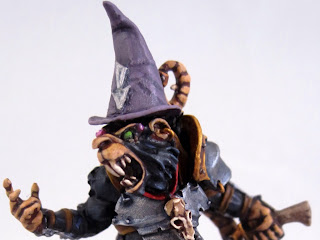 Blob’s Park is giving me a bit of heartburn.  I’ve got a 2,500 point list that I’m happy with, that I’m comfortable with, that I’ve done pretty well with.  Most importantly, it’s painted.

Blob’s Park, woefully, is 2,800 points.  I’m not entirely sure why the bump, except that there must be some nonsense you can drop with 700 points of Lords or Rare or something that they want to see.  For me, though, it’s another 300 points that I’ve got to get painted.

This is unfortunate, because just throwing more points at something always ends badly.  C’est la vie.

Anyway, my goal was to get up to 2,800 with adding as few models as possible.  I had a plan that involved 6 Globadiers and a Doom Flayer, but then inspiration hit and I decided to bridge the gap by throwing down a Warlord with a Wizarding Hat.

One model?  Room for a clever conversion?  Ability to use one of those sweet, sweet book lores?  Yes, please!

After some noodling and doodling and digging around for parts, I considered and then had to dismiss, modeling it as a brain jar.  That’d have killed… but it wasn’t to be. 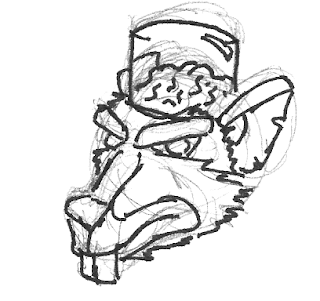 So, I went with my initial plan: a big ol’ hat made out of paper hardened by superglue. 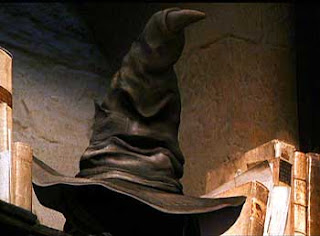 I had Warlord Spinetail sitting in the bits box: I used his sword and arm in my War-Litter, so I might as well do something fun and goofy with the remainder. 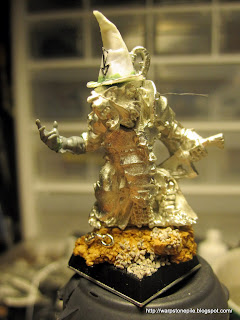 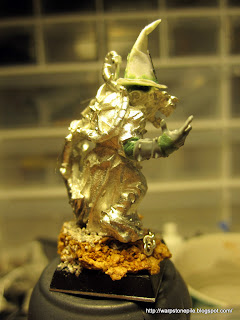 I used a Stormvermin arm and an Ungor hand.  I was shooting for a cool, “Behold, I am a master of the arcane arts!” pose… instead, I ended up with a pose that’s a bit more of a rude gesture.  I guess I’m okay with that.

Also: I kind of hate the Spinetail model.  The sword is awesome, but what in heck is up with his right eye?  I don’t even know what’s up with that.  I just. don’t. know.  Ugh.

Here it is, finished. 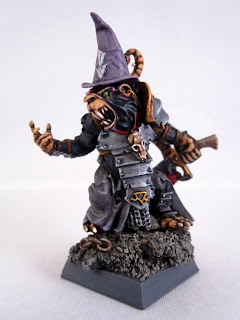 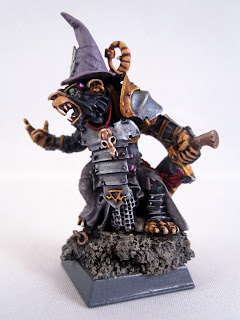 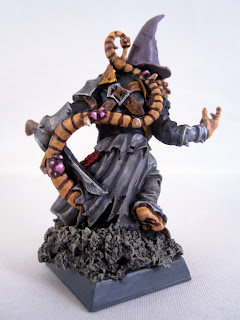 I gave it the Lore of Shadow symbol, since I was considering using that on the Warlord.  It’s way more purple than is appropriate for Shadow (I guess that makes it Death), but at least it stands out in a way a grey hat couldn’t.  That’s probably more important.

Uuuunfortunately, while pinging the CGL for advice on what Lore I should give this sucker (Shadow?  Beasts?  Metal?), I found out the item’d been FAQ’d… and FAQ’d hard and in an uncomfortable place.

I’ll get around to how I’m padding out the list later.  (Probably after the tournament, since it looks like it’s closed-list.)  Do you guys think I could call him a Warlock Engineer? I’m not as crazy about this guy any more.