So, I’ve been playing handful of games with Orks and I’m not surprised to learn that moving all of those bodies is a time-consuming hassle.

I’ve yet to play a tournament in 6th Edition, but I can’t imagine that things have changed that much: that Orks benefit (greatly) from incomplete games and that Orks (greatly) lend themselves to slowplay (deliberate or otherwise) by way of needing to move a million models.  Knowing that I’m not naturally the fastest of players and not wanting to Be That Guy, it occurred to me that I movement trays of some sort are called for. 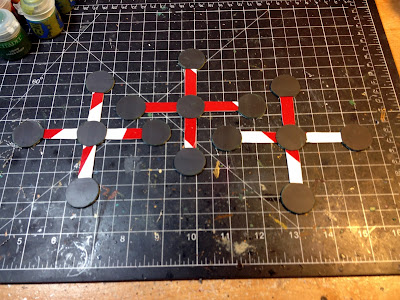 Five models each.  One dude in the middle, and four guys equidistant around him, about 2″ from center to center.  I did up a template where they were just barely under 2″ apart altogether: although it’d be ultimate safety from blast templates, it was obnoxiously large.  This is spread out a bit, but not too much.

It’s plasticard (from a For Sale sign) and some business card magnets to hold the models to it.  Eventually, it’ll get the same sort of ballast/sand/static grass treatment the models will get. 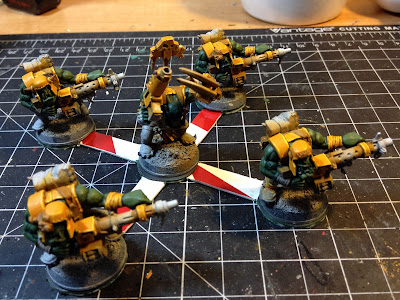 More than this would be too cumbersome: positioning needs to be flexible in 40K, but I think moving five at a time will speed things up quite a bit.

The idea is to run a few of these trays, and then hold them in coherency with a model between the trays, thusly: 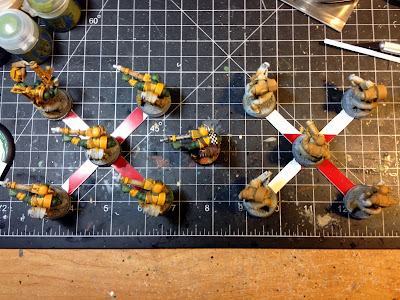 I’ve only assembled three of these: it was kind of a pain in the butt, and there’s no guarantee that they’ll be useful.  I’ll have to get a few games in with them before I make a few more. 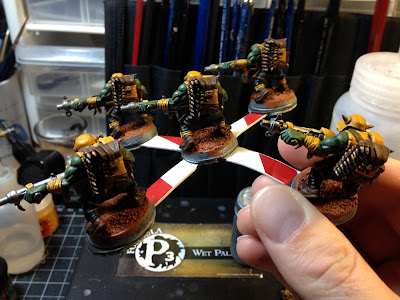 If they work out okay, I’ll see if I can’t scan in/remake my template and post it.