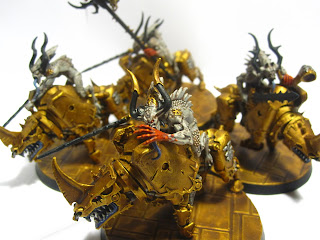 It’s been dead quiet ’round here, mostly on account of work being a bastard.  I expect that will pass when July does.

That said, I have gotten a few things done:

I’ve been plugging away at finishing the Bloodcrushers that have taken me, what, two months to paint?  God, I’ve really grown to hate these things.  Fortunately, I’m done with them.  (Just in time for plastic Bloodcrushers to be confirmed.  Bah.) 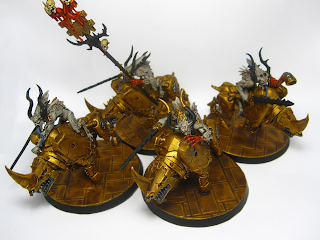 Nothing new here, really.  Painted up about the same as the other batch of Bloodcrushers, except they’ve been squad-marked with blood on their hands.  I suppose a strong argument could be made that, in general, they don’t look as good as the other batch: that wouldn’t surprise me.  I’ve hated these guys for a couple of weeks now.

Next on the docket for the Daemons is a few Bloodletters.  I need to assemble and paint the models to give each octet the full range of non-musician icons (so, four regular bloodletters to replace Fury and Icon ‘Letters and an Icon ‘Letter), bumping the octets to ten models each.  (Shut up.)  After that, I need to build my second Chariot of Khorne.

Before I do any of that, though, I’m going to paint some Skaven.

I’ve started plugging away at a few characters, looking for some easy wins (after the interminable Bloodcrushers) and to build up a little momentum.    That means the Warlord on Bonebreaker Rat Ogre, the BSB and a random other Warlord/Chieftain built primarily out of Stormvermin bits. 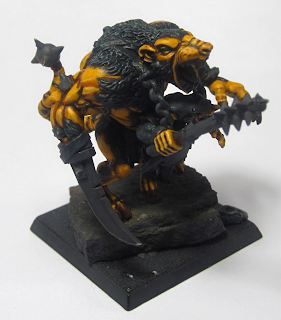 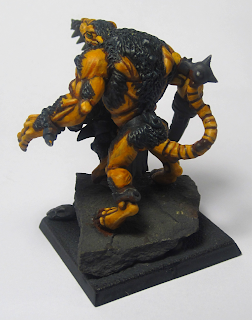 I am wholly displeased with how the flesh turned out.  It took me so freaking long to get coverage out of the Bronzed Flesh, I don’t know that I’m up to stripping it down and starting it over.  Mike‘s been pushing me to put the mini in the Golden Daemon, as it’s a neat conversion… but not like this. 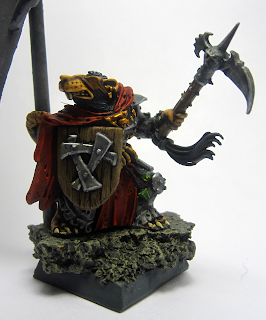 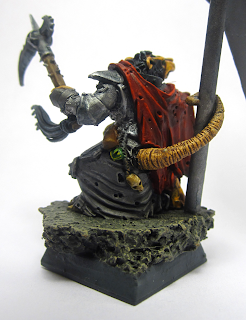 The BSB is coming along much better, however.  I’m quite pleased that I was able to replicate the armor on my Stormvermin.  The banner itself is going to be a separate undertaking. 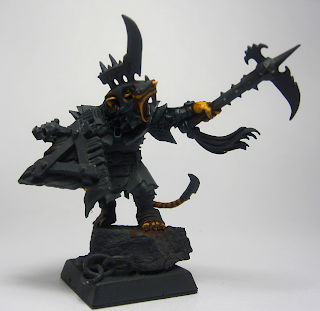 Not much on the Warlord yet.

I’ve have spent some time over the past few weeks stripping some Skaven minis I’d gotten in some lots a couple of years ago.  The Power Dissolver is king.  That said, I do have to revise previous statements re: Power Dissolver and gloves.  For a few minis, gloves aren’t really necessary.  When stripping a pile, however, it really will dry out your fingertips… so I’ve started to use gloves.  Thought I’d mention that.

Finally, my buddy Mike’s started up his own hobby blog: The Black Ark Apathy.  He’s out near Cupertino now, and is looking for folks to square base it up with.