Although I’m still working towards the goal of getting the list I’m currently running 100% painted before I start screwing around with it and doing more units… I’m already kind of looking ahead.

I’m pretty sure I’m going to drop the Plague Furnace: it’s great, but it’s basically 150 points for Unbreakable, which is pricy.  For that much, I could easily get another horde of Slaves… and more.

So… unit filler.  If only as a bridge until I come back and paint more Skavenslaves.  I got stuck on a conference call a couple of days ago and, while twiddling my thumbs threw these guys together.: 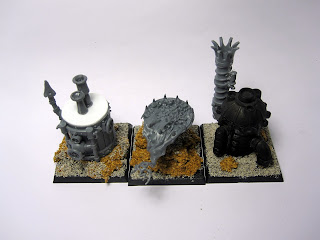 The one on the left’s a Steam Tank boiler I found on eBay inexpensively, with some Manor bits.  The middle, obviously, is the brazier from the Screaming Bell.  The left is some really awesome Pegasus Chemical Plant with some of the other Steam Tank bits.

I figure I can use three in a horde without too much issue:

On reflection, I probably could have cobbled together some 40×60 bases instead of the 40×40.  Maybe I’ll make a pair of them to run down the middle in each unit or something.

Even if I don’t, three per horde takes the place of 12 slaves, which saves me from having to paint almost as many slaves as I’ve already got painted (30).