Not much to report, I’m afraid.

Painting this second quartet of Bloodcrushers has been like pulling teeth, I swear.  It’s been inexplicably hard to motivate myself to work on them.  I’ve had them assembled for over two weeks now… and they’re maybe three-quarters of the way done. 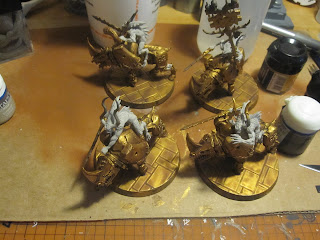 As you can see, the brass is wrapped up, but I’ve got to do pretty much everything else.  I’m hoping I can power through them later this week… just to have them done.  I’ve got 1) objective markers and 2) other stuff to work on!

Because the ‘Crushers were being frustrating, and I really felt the need to accomplish something, I painted up the Ruins of Osgiliath I picked up back when.  This is a pretty solid kit and it painted up ridiculously easily.

Sadly, I’m not posting pictures of it.  Clearly, an upcoming weekend project needs to be “Build a light box;” the color of the picture came out so damn weird, there’s no point in them.  Anyway..

I wanted to do something a little different than the Charcoal Grey -> Medium Grey -> Light Grey scheme I use with pretty much all of my other terrain, so I went with the colors I used on the base for my Dark Heresy character: P3 Cryx Bane Base -> P3 Cryx Bane Highlight -> P3 Hammerfall Khaki.  I think I went a bit too heavy with the khaki highlights, but it still came out pretty well.  It’s a lot brighter and looks older, I think.

For the wood, I did something similar: I used P3 Hammerfall Khaki as a base and highlighted it with Khemri Brown before washing over it with some Devlan Mud.  I’m extremely happy with how that came out.  I like the result enough that I’m half thinking about figuring out an army I can paint this way (more or less).

When I wrapped that up, instead of returning to the Bloodcrushers, I did some gap filling on the marine statue from the Honored Imperium kit; I’ll be doing that with metal and verdigris, so I wanted to clean up the somewhat substantial gaps in the otherwise awesome model. 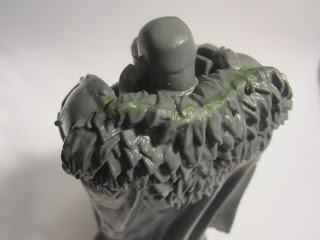