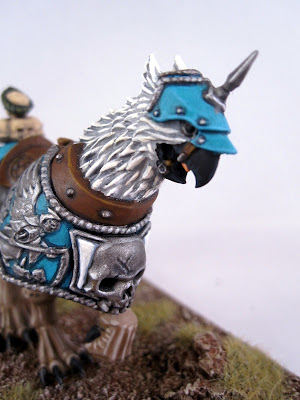 If you look at my Hobby Status log, things are grim.  Nothing since April.  Pathetic.

And, technically, I suppose I still haven’t (that Daemon Prince assembly doesn’t really count, does it?), since I haven’t touched this sucker’s rider… but he’s negligibly easy.  As in the game, the rider’s hardly the point. :)

Anyway, I’ve been jammed up on finishing this test model for the Demigryphs.  I’ve been trying to make sure I’m happy with the paint scheme before I commit to painting another three of these guys.  It had been my hope to enter these guys in the Golden Daemon later this month, but I’m not sure if I’ll have them done in time.  It’s possible, but not likely.

Anyway, since I’m doing something of a a maritime-themed army, I wanted to paint these guys like the were sea creatures.  So, instead of a lion, I went with a seal.  Instead of an eagle, I went for a seagull. 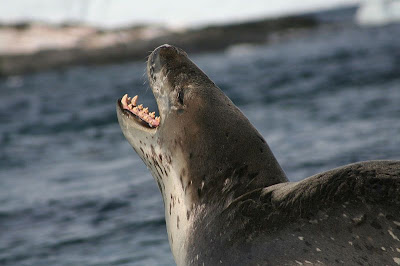 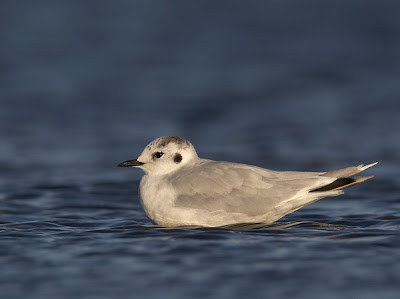 I’m not sure I was effective with the the seagull side of things, but at the same time, I think adding those dark patches to the head would muddy things.

These guys are elite members of the Sons of Manann, hence the turquiose and white armour.  (Mrs. Rushputin: “I thought your Empire guys were blue…”) 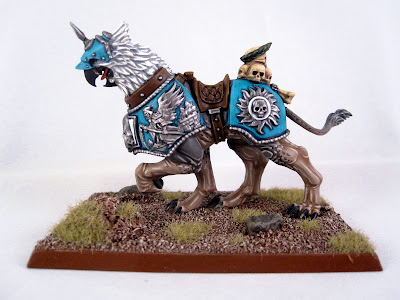 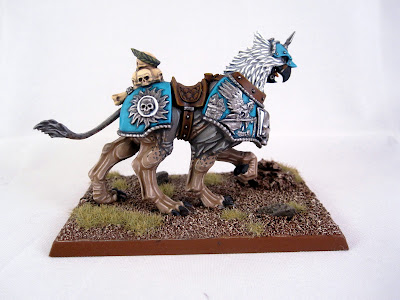 Fun fact: I’ve said before that I’m doing zenithal highlighting on this army (and I’ve also said that I probably slap enough paint on these models to defeat the point).  Well, it’s even more stupid and pointless to do on these guys: the point of zenithal highlighting is to make the top lighter than the bottom, but the coloration of seals is deliberately the opposite: they want to look lighter from beneath and darker from above.  So, that means more thin layers of paint all around.  Good times.
I don’t think I’m going to bother with the rider just yet: I’m crackin’ on getting the other three birds painted up and then I’ll knock out all of the riders.
(There’s also a teeny bit to clean up on this guy, but I won’t point out where.)
Since I was so excited to get varnish on this sucker, I went ahead and took a couple of glam shots of him, ’cause that’s how I do). :) 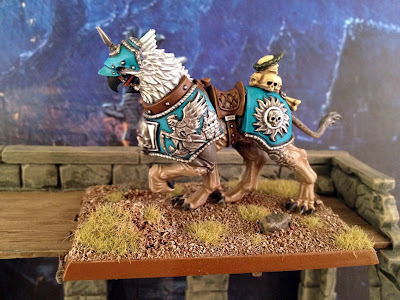 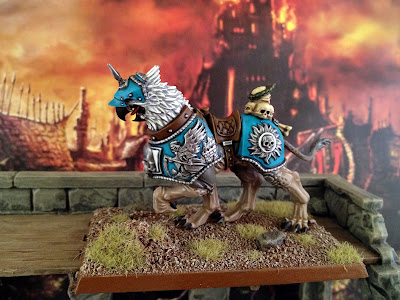 These backdrops remind me that I need to get a new one printed off for this army.  This painting of the Danish coast (which I imagine maps well to the Nordland coast) by Johan Thomas Lundbye is a big part of my inspiration for the army, so it’s what I’ll probably use. 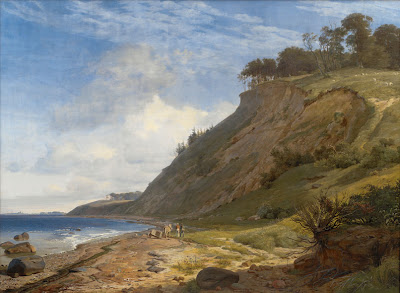