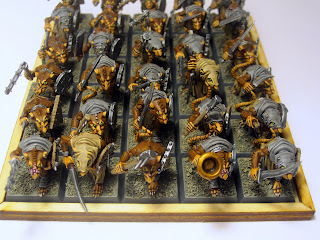 It’s been a week and a half since I last posted…. not too much going on, ’round here.

I haven’t been able to keep up my soul-crushingly-slow-but-totally-reasonable 10 Clanrats/Skavenslaves per week pace; too much other stuff going on (four days out of town for Labor Day weekend don’t help, for example).  I’ve made peace with that, though.

I did varnish 10 more Slaves, however, which puts me at 40 painted Clanrats/Skavenlaves (which is just shy of 50% of where I need to be) and at one full Skavenslave block.

That’s a milestone.  So, I took some pictures! 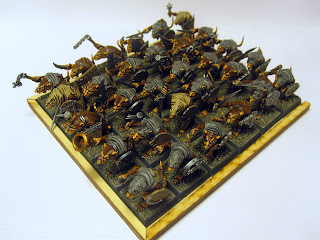 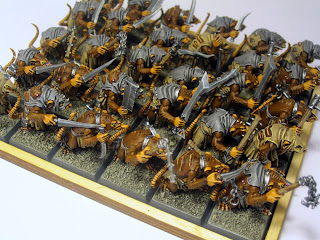 Of course, I’m making it sound like I haven’t been doing hardly anything, which is verifiably untrue.  Between all the Skaven I painted last month (31 figures) and all the terrain I built (8 pieces), I clocked 71 painting points last month.  That means August was easily my most productive month, by quite a bit.  (I log all of this stuff, a subject that really deserves its own post, I suppose.)

I’ve been playing a game a week in our 8th Edition “Learn the New System” League.  I’ve lost dang near every game.  This means I really need to go back and reread everything Rhellion has posted about his Skaven to figure out what he’s doing that I’m not (besides winning with his Skaven).

I’ll be heading up to Germantown (ick) tomorrow to help playtest the NoVApocalypse format.  I’m looking forward to it: should be both interesting and laid back.  Also, I haven’t played 40K since the Whiskey Challenge the night before the Open, so that’ll be good.  I’ll be rocking the Khornate Daemons. My list isn’t completely finalized, but I imagine it’ll be something extremely like:

I’ve got 24 points left over, so I’m sure I’ll find a use for them.  Or I could swap out the Bloodcrushers for Daemon Princes or something.  I dunno.  It’s tricky to do a 1,500 point list (which is why I like the format, I think). Not thinking too hard about the list, though.

I’ll be skipping out on the 8th Edition League tournament: this past weekend really kicked my butt and I’m already committed to the NoVApocalypse thing… so I’ve got to find a weekend off somewhere.