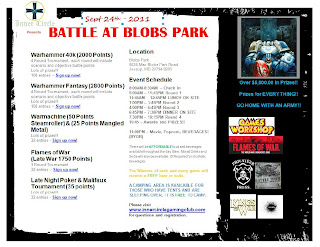 I’m going to be playing Fantasy at Blob’s Park this weekend!

I’m mostly ready for the tournament: I need another Warlock Engineer, and have an exciting conversion for him mostly done… but it looks like the last few bitz I need to finish him aren’t going to show up until Friday afternoon, which isn’t going to give me enough time to paint the thing.  Instead, I’ll just use this guy and call him a Warlock Engineer.  I don’t think anyone will complain.  The larger undertaking, a Plagueclaw Catapult, is done: I’ll be varnishing and photographing it this afternoon.

This’ll be my first year there: I’m a little apprehensive about the site.  I know it’s outside and at a biergarten and, while that sounds cool on paper, all I can do is worry about logistics: will I be able to sit, will there be enough water, etc.  So, just to be safe, I’ll be loading up a folding chair and several liters of water.  It’s probably a safe bet that I won’t need (or be able to) bring a cooler of beer.

Anyway, I’m looking forward to it!