Just spotted that Games Workshop is rolling out digital book releases on iTunes.

This should be a Big Deal.

I know that, as soon as I picked up an iPad, I loaded it up with FAQ PDFs and, as tablets have caught on, other folks at the club have started doing the same.  Doug McN rolls to tournaments with bins of codices for reference, which is a lot of hassle. GW providing electronic reference copies is huge; they turn a 20 lb box that he’s got to wrestle around into a tablet..  And I want those reference copies, legit.

I’m unhappy with the reality of it, though: 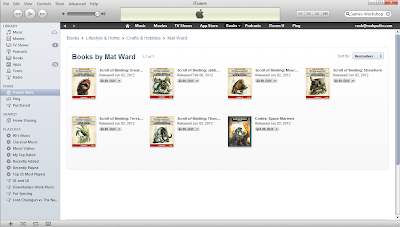 For starters, this is all tightly bound to the Apple ecosystem.  I’ve decided I’m happy living in it, but not everyone is.  If you’re in the Android sphere, at the moment, this does you no good.

Also, it’s tough to find what GW’s actually offering.  I followed the link in the article, which of course runs into iTunes, and I get one Scroll of Binding by Mat Ward and a couple of books that maybe he contributed to?  Clicking through on the Scroll of Binding shows “More by Mat Ward” which turns up the above results.  So, I’m not even sure how I’m supposed to find what GW’s offering digital.  That makes things difficult.  This is probably Apple’s fault, though, since it’s not like iTunes provides all that great a digital shopping experience.

I’m not happy with GW shilling Scrolls of Binding for $1, since I’m pretty sure that’s the sort of content I have a White Dwarf subscription for.  $1 is totally doable (it’s less than a trip to the vending machine at work), but if they’re going to start putting new rules supplements up here, it’s tough to justify the magazine.  (White Dwarf’s value, or lack thereof, as well as its general lack of timeliness has been discussed to death elsewhere.  At least my copy of June’s issue showed up before the product it’s shilling for.)

I get that pricing products digitally vs. physically is not a straightforward, simple equation.  I get that the bulk of the costs in generating a book have little to do with the physicality of the book.  But damn, I’m just not comfortable with paying the same amount for a digital book I don’t exactly-completely own as I would for a physical print book I unambiguously own that I can resell.  (Plus, this is priced at the post-price increase cost, so it currently costs ~$10 more than the print book, which is a particular button for me… but I get that it won’t last, so I can’t let it set me off.  Again: the annual price-increase thing’s been talked to death elsewhere; I have nothing to add.)

eBook pricing is a complicated, nuanced thing.  I get that.  But an eBook priced at 100% of the print book cost, particularly at a >$40 price tag is not something I’m willing to invest in.  This is making me feel pretty bitter.

(Two negative posts effectively in a row?  Crap.  I need to start posting painted mini pics so I can turn things around!)

I threw up some just-shy-of-done pictures of my D&D character last week.  Since then, I licked ’em with some varnish and stuck them in the lightbox for some higher quality pictures. 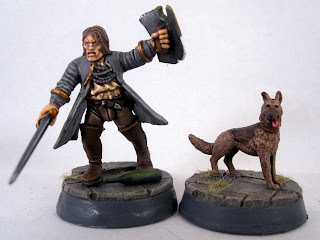 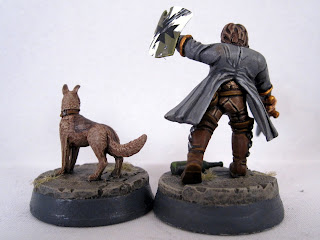 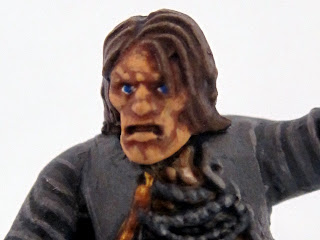 I tried doing some weathering on the shield.  Clearly, there’s some room for improvement here, but it’ll do. 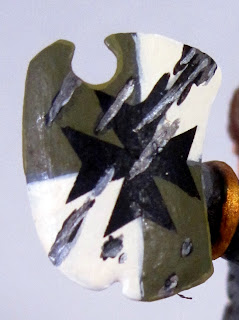 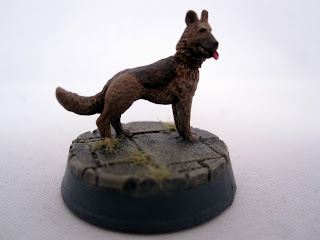 While I had the light box out and my P.A.C.K. Mini (where I keep my RPG minis) handy, I took some more scenic/HDR photos.  I’ll throw them up in a day or so. 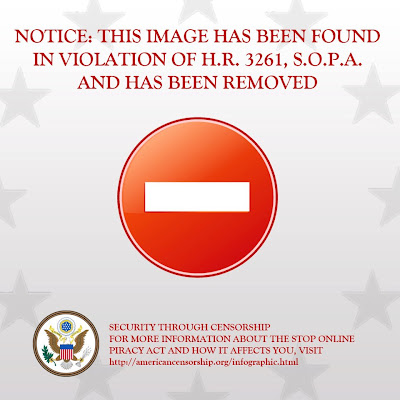 It’s just occurred to me that a stacked chart communicates hobby points better a lot than a layered multi-series line chart. 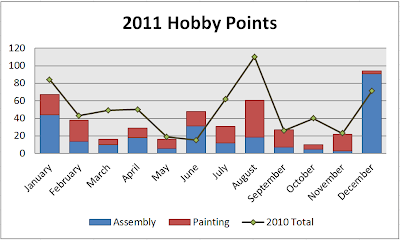 Much easier to read, and conveys as much information as, like, three other charts. 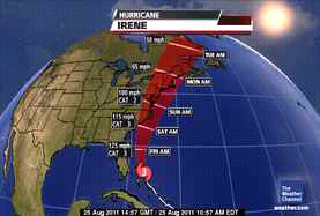 Man, I really hope Irene doesn’t mess with the tournament.  (Mostly because it means a lot of dangerous weather for everyone, not just an interferance with my ability to play toy soldiers.)

Right now, they’re talking 100 mph winds in the region on Sunday morning, and hurricane force winds specifically in the area the tournament is being held in. 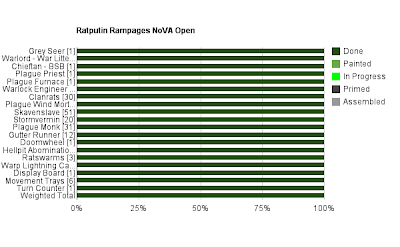 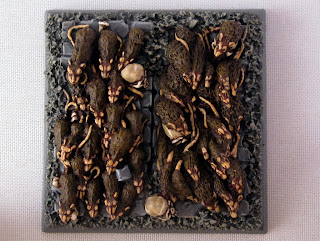 I’m in the final stretch!

I just slapped some varnish on the rat swarms and the last model that needed rebasing. 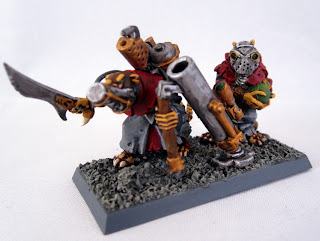 This is the same Poisoned Wind Mortar I built back at the end of ’09; it just needed rebasing to tie it in to the rest of the army. The Rat Swarms weren’t exactly necessary.  They’re there in case the Hellpit dies (likely) and explodes into d3 Rat Swarms (unlikely).  Might as well cover all of my bases, right?

That means all I have left to do is:

The end, that’s it!  The board I’m going to work on this weekend.  I’m going to procrastinate the banners until next week. 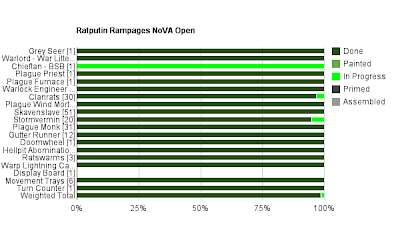 Called the local GW on the way home from work today to see if they had any square 20mm slottabases in stock: I’m rebasing the Skaven and need some more for the Stormvermin.

The guy said, yeah, they had them in stock.

“Oh, we don’t actually have any in stock.  But you can order them right over here…”

I turned around and walked out.

If I wanted to order them (and I’ll have to), I’d have done it my damn self.  I stopped by because I’d been told my immediate need for slottabases could be filled.

I’m trying to decide if this guy was just a complete idiot who wasn’t up to the task of turning around and looking or if this is some equally idiotic plot to get me to put $5 worth of slottabases towards the store’s sales.

I’m also considering calling GW and complaining.  It’s not a big deal, but this guy was either too dumb to answer my question or he flat out lied to me about the answer.  On second thought: he was a black shirt.  I am going to call.

Could someone going to the Chicago Games Day do me a big favor?

I really want one of the Games Day Skaven Warlord minis, but won’t be able to go to Games Day (for the first time since I got back into this hobby).

Would someone who will be there be willing to pick one up for me?

I’ve got several friends who are in various stages of getting to the hobby.  This is wonderful.  It also means that they’ve got a lot of questions about what they need to buy and how they do stuff… that sort of thing.  Although I could harumph about how often I’ve had to repeat myself, just writing up everything in a single place I can easily point folks to would be both more sincere (because I love talking about this stuff, so the most I could manage is good-natured harumphing) and useful (to them, when I’m not around).

I expect I’ll add to this article as things occur to me, rather than supplement it with existing articles.  I’ve structured things based on the lifecycle of a model, from sprue to finished dude.

The actual process of assembly’s not hard, it just takes a lot of patience.

Use the clippers to snip the bits off the sprue (plastic models) and flash off the model (metal models).  Eyeball the model and try to find the seam: the line of extra material that indicates where the two pieces of the mold met.  Using the seam scraper, files and hobby knife, do your best to smooth that line away as well as to smooth out where clipped stuff off the sprue.  It’s easy to miss this stuff (especially with metal models), but is important: the better your paint job, the worse these will look.

If you’re working with a metal model, you’ll probably want to consider pinning it together.  I hate pinning, but I hate my models falling apart even more.  There’s a great step-by-step on how to do this on Dakka.  It might seem like a lot of hassle (it is), but it’s worth it.

Before you paint yours stuff you need to prime it to give the paint something to adhere to.  I’ve been told that priming is optional with plastic minis, but I just go ahead and prime everything.

Color’s significant: using white primer will result in brighter, more vibrant colors.  Black primer will be more forgiving when it comes to missed spots (it happens).  I use grey because it’s a nice middle ground.

The blu-tack is if you’re priming and painting sub-assemblies: cover any contact points with blu-tack.  That’ll ensure that, when you’re done and putting everything together you’re gluing part to part and not paint to paint.

Actual technique is something I find difficult to articulate.  Aim for quick passes and short bursts of spray.  Distance depends on the brand of primer, but farther away is better than up close: so start farther away and work your way in as you get a feel for how the primer behaves.

Some people like to use a spray stick (a broomstick or somesuch that they blu-tack minis onto), but I prefer to put on a dishwashing glove and just hold the mini while spraying it.  The key is being able to get all angles, just just the top of the mini.