I’ve got precious little painted in the past week, thanks to an unfortunate work schedule as well as a number of other obligations. The next few weeks don’t look like they’re going to be much better: in fact, I think I’m going to have to declare the weekend of May 15 – May 17 “Fuck you, this is my free weekend!” Weekend.

I did wrap up a rank of Haradrim archers and a Haradrim Banner, however. I still have to paint the design on the standard, but that will wait. 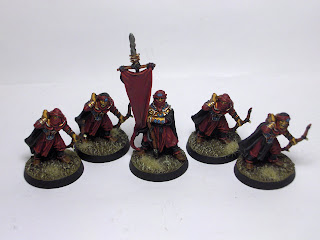 I also went ahead and converted up some hornblowers. They don’t make musician models for the Harad troops, but they’re certainly an option in War of the Ring (and, as of White Dwarf, 352, Skirmish of the Ring… where they’ll be tremendously useful for my Far Harad).

The conversions were pretty minor: just an arm and a hand swap. I used horns from the WHFB Wood Elves, with the expectation that they’d be suitably feral. They look really good, I think.

28mm elf hands, as it turns out, are just a tiny bit small for 25mm man hands. So, they’re darn close enough. I also ordered some Beastman horns, to see how they’d look. Those hands are much too large, which is unfortunate. Still: all of this is a much better approach than the once GW Fair Oaks suggested: by the $25 Rohan command kit, cut off the arm off of one of them, use it, and you know, just forget about the rest. 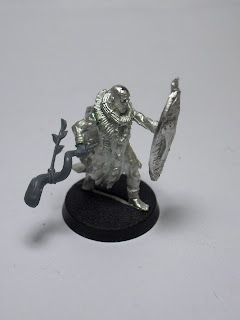 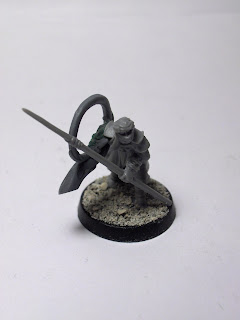 I also made a banner bearer for my Mahud Warriors. I went around and around on approaches, and finally settled on just using the rack thing that comes with the Mahud Chieftain/King model. Although I think the racks look awesome on those models, I need something to represent a banner, and I can’t think of anything that’s quite as appropriate. 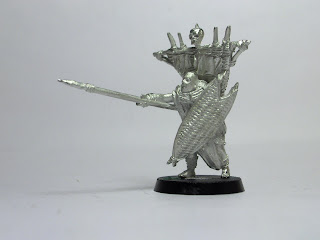