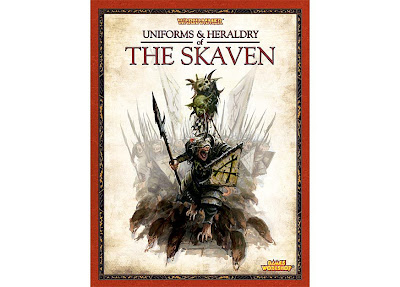 My ratty order from GW just showed up.  Didn’t order much: a Doom-Flayer ($20!?), the Magic Cards (very key) and the Skaven Uniforms & Heraldry book (which I’ve been unreasonably excited about).

Gave it a quick flip through and, I’ve got to say, I’m not entirely impressed.

The art’s about what you’d expect, which is fine.

There are unaligned clans in there, sure, but it feels like the bulk of them are along the lines, “So you want to run a Pestilens-themed army but also want to use other stuff.”  And that’s okay.  I just question the need for three (for Pestilens, at least) such clans.  The first is totally reasonable.  The second is pushing it.  The third really feels like filler.

There are some interesting clans in here: Clan Skurvy is totally cool, for example.  They feel outnumbered by the filler clans, though.

Interested parties should check out Children of the Horned Rat, for WHFRP 3E, which doesn’t have nearly as many new clans, but all of them are interesting (I thought, until checking, that Clan Skurvy was Clan Sleekit).  (There’s also a random Clan generator, I’m seriously considering wrapping a webapp around.)