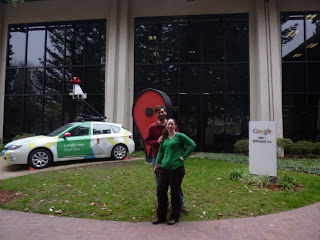 It’s been dead silent around here, I know.  We went on vacation last week and the trip, the lead in to it and the catching up from it has been brutal on my free time.

The Snotorious B.I.G. that smacked the tar out of my half of America on 1/26 pushed our flight back a day, though, so I managed to spend the day working a Warp Lightning Cannon. 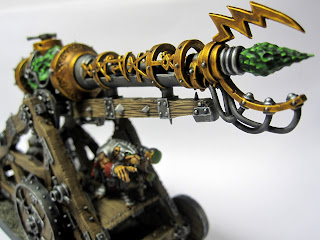 I hadn’t planned to work on it at all: I’ve got one of the old ones painted up, and I’ve only been fielding the one.  But, I cracked the kit open to see how things fit together.  This was a mistake.  If you’re going to start clipping this model off the sprue: be prepared to assemble it.  Be warned.
Furthermore: you cannot assemble this sucker.  Not without painting it first.  You can put together sub assemblies, but if you ever plan to paint it, that’s as far as it’s going to go.
So, I kinda got stuck painting it. 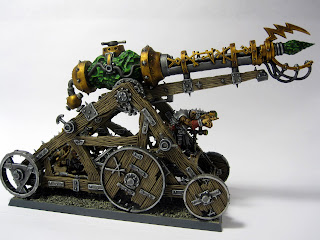 It’s a great looking model, though.  I’d originally not been a big fan of how high up the cannon is, but I’ve really come around on that.  The model really feels like something that might get fielded in a battery.  It’s less of a cannon and more of an artillery piece, if that makes any sense.
Anyway, I’m really happy with it.  I just wish I hadn’t been trapped into painting it… 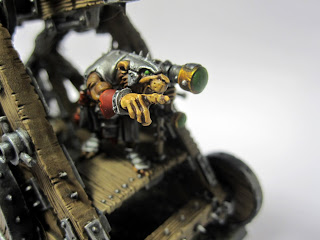 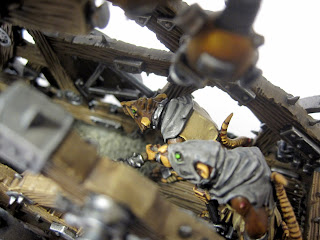 In the few moments I’ve found since finishing this, I’ve started on two more small projects.
I’ve decided to paint the Warlord on the War Litter: 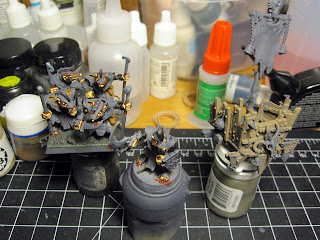 This thing’s going to be a pain to paint.  At least the bearers will be.  I can tell already.
I’ve also started construction on a third Belial model.  I had an order from MaxMini come in: Shoulder Pads.  They’d also thrown in a Steam Knight helmet for the heck of it… which was serendipitous. 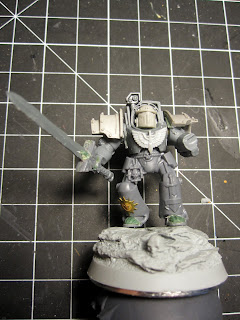 The base is half of the Slate Wasteland’s Hero’s set from Dragon Forge.  The pauldrons and head, are from MaxMini, of course.  There’s a brass etched icon on one of the legs, and a resin Dark Angels symbol (with the sword broken) from… something from Forgeworld.  The sword is a Thunder Hammer Arm, two of the sergeant backpack icons from the DA veteran sprue trimmed and fused and worked together for the guard and a cleaned up Hellblade for the blade.
The shield will be an Assault Terminator Sergeant’s Shield: Casey is hooking me up.  I need to decide if I’m going to just use it as-is, or if I’m going to shave the iconography off and try to sculpt something.  I’d like to sculpt, but I imagine the outcome won’t be very good.
On the upside, however: I’m done making Belial models.  This guy will be Number 3.  So, I finally went ahead and magnetized the arms. 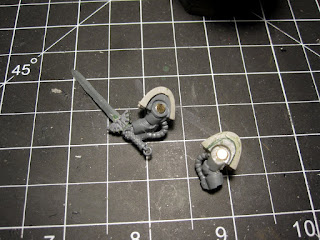 Although #1 has Lightning Claws and #2 has the Sword of Silence and Storm Bolter… I can always come back and build those for this guy.  Or if I decide I dislike the Thunder Sword or something.