I got to do something on Saturday I haven’t been able to do in kind of a while: nothing.  My wife and I puttered around all day, sleeping in and catching up on the new Doctor Who.  That meant I had a lot of time to sit at my desk and get some things done.

I haven’t really accomplished much of anything, hobby-wise, since I wrapped up the Sternguard, so this was nice.

First off, I finished painting the mini for my Dark Heresy character: Caleb Plex, Scum. 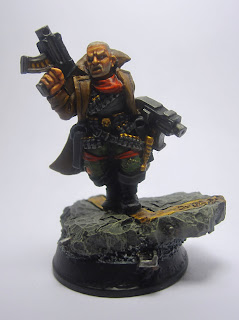 The base is a Micro Art Studio Temple base, and it’s pretty swank.

I’m unhappy with the stubble effect, though.  I’ve done it before, successfully, but here it comes across more like a beard than stubble.  I probably needed to mix a bit of brown in there.

Additionally, I managed to assemble a second quartet of Bloodcrushers. 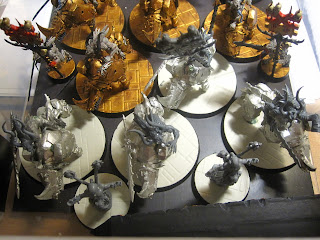 Nothing fancy, here.  Pretty much just the same thing I had before.  The other unpainted guys are Forgeworld Renegade Psykers, which I’m going to use as objective markers.  I need to paint them, as well.

Finally, because I had to wait on greenstuff to cure and because it was on my mind, I started painting a few Malifaux minis.  Specifically, three Witchling Stalkers. 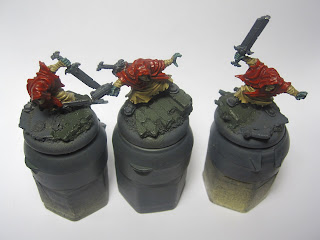 They’re actually pretty close to being done: just need to do the bases, the swords and the boots.  I experimented with them a bit, and I’ll probably get into a little more detail  about how when they’re done.