I won an excellent auction on eBay last week, and it finally showed up yesterday.  I wasn’t really looking for a second AT-43 army, but it was too good a deal to pass up: the lot had been going for $100 when I noticed it and I ended up snapping it up for $153.

The guy noted that he didn’t really know what was in the lot, just that what was shown was what I’d get.  Not a problem. 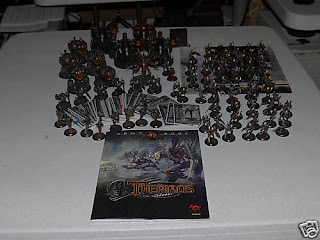 Now that I’ve had the chance to really work through what’s in the box: it really was a great deal: 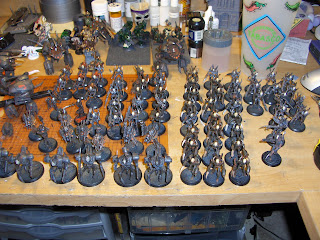 If I assume that as many of these minis came from Operation Damocles boxes as possible (which is tremendously likely, though I don’t actually believe it to be the case), that’s ~$650 worth of stuff at MSRP.  More likely, because so much AT-43 is still floating around at deep discount on sites like The War Store and FRP Games, all of this stuff is worth much closer to $400.  That’s still an incredibly good deal; somewhere in the neighborhood of 77% – 62% off, depending on how I want to look at it.  Plus, Assault Medusae aren’t listed anywhere, now… not even on Rackham’s AT-43 site.

There was a slight drawback in that every single strider in the package was broken. 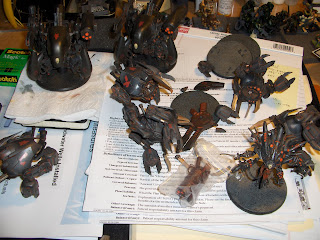 The seller had too much faith in styrofoam peanuts.  I expected there to be a bit of breakage, but this is far more extensive.  Even that I’m okay with (he did warn that there was some breakage, and it was a great deal)… the only really vexing thing is that I seem to be missing a couple of bits of of Golgoth.  I’m a few spiky bits short of having five Hekat Golgoths.  Given the savings, I can’t complain much, though.

I might, in the near-term, supplement it with a Nina Zero, a Baal Golgoth and maybe some Assault Goliaths… but nothing else.  There’s no need.