Who knows if I’ll ever get to play the game, but I do enjoy painting Aeronautica Imperialis.

I felt obligated to paint up the Adeptus Astartes aircraft the same way I’ve been painting my Crimson Fists. I’m very pleased with the results, but it does mean that I couldn’t use the basecoat/oil wash approach I’ve been using for the other AI models.

I was able to do that with the Arvus, though. Only complaint with these guys: I got too excited about wrapping them up I forgot to put some decals on them.

It took a goddamn month for Forgeworld to ship the ground assets I’d preordered but I’ve got a whole post about how utter crap GW/FW has been about shipping well and above any sort of logistical challenges posed by the ongoing pandemic that I need to write up.

I also banged out some ground assets for my Navy/Guard and Tau, using the quick and dirty approaches I used on their respective aircraft.

A few random things on my forebrain about the game:

1. What the actual hell is up with their release of the game?

I hadn’t quite realized how half-assed their approach to the game was until I went to build some Thunderbolts. I bought some Thunderbolts, you see, thinking they might be fun to add to the Imperials I got with Skies of Fire.

“What are their options?” I asked myself. That’s when I realized: I have no way of knowing.

They’re not in the available 2020 Imperial Navy+Astra Militarum Aircraft & Aces cards; they’re in the 2019 Imperial Navy Aircraft & Aces cards that have been OOP since June. They’re not in the Taros Air War book; they’re in the Rynn’s World book that’s been OOP since August. (Neither are to be found online.) In fact, the only way you have any ability to purchase these rules is via the $35 ePub.

This is even more outrageous when you consider that although this is true of half the Imperial options, it’s also true of the entire Ork faction. If you want to play this game with Orks, you’re buying a $35 ePub. Ugh.

(I was lucky: my FLGS, Huzzah Hobbies, happened to have a pack of the 2019 Imperial Navy cards. But that’s the only way you’re going to find them: just some stock somewhere that hasn’t moved at a store that doesn’t do websales.)

Speaking of cards: the card packs include some big cards but also some little cards. I didn’t like how the little cards would sort of float around in the bottom of the box, so I made a little tray divider.

FDM printers are perfect for me, because something like this really bugs me and a few minutes in TinkerCAD lets me solve it.

I’ve fully converted to the Olo Pawi A-Case Church of Magnetization. But…. I don’t think these AI aircraft will take magnetization well.

But I am pretty much fucking around with foam, and I am absolutely not tracking foam down for this.

The solution: hexes that keep the bases from sliding around, which in turn keep the aircraft from bumping into each other.

Some variations of this to fill out a Sterilite Stack-and-Carry (this is the largest size I can fit on my print bed, but multiple jobs and some glue can work around that). Between these and a thin sheet of foam across the top to keep things from popping up out of their hexes and I think I’m solid.

This won’t do but so much if I decided to toss the case down the stairs, but it’ll keep everything in place and safe to and from the game store.

That’s pretty much it. There’s a non-zero chance I pick up some more AI models. They’re so easy to paint I really enjoy it. Not likely to be able to play the actual game any time soon, so who knows if it’s any good but: if I’m doing it for the joy of painting, who cares?

I love/hate these. I love how the aircraft came out: I think the results are excellent, particularly considering how little effort went into them. I hate how the bases came out: I feel like every decision I made around them was wrong and I ended up spending more time on the damn bases than the aircraft, if that’s believable.

When I say “little effort,” I mean it. These are all basecoated, a few details picked out with solid colors, and weathered with oils (burnt umber). That’s it. The Tau got the tiniest bit more effort, with the top being different colors from the bottom and with a second color being airbrushed on for “camo.”

Really the key is going light so you can go nuts with the oils. I started trying to just pin wash, and got lazy. That’s fine: it’s way to remove oil paint and that’s kind of the point. By brushing it away from nose to tail, I can clean up my mess and add texture & depth.

Bases aside, all of this was the work of maybe two afternoons.

These were my first batch. I skipped decals on these, and I feel like that was a huge mistake: just the tiniest bit more effort and they’d have come out quite a bit better.

Played my first two games of Lord of the Rings (the skirmish game)* and my first game of Aeronautica Imperialis last night.

I won’t get into how they went (2 for 3) of what I used because they weren’t so much games as demos. I certainly had no idea of what I was doing in either system: it’s been months since I last read the Lord of the Rings rules and I’ve never read AI’s.

All were fun enough; all are going to take a great deal of getting used to. The simultaneous turn thing (present in both games) is going to be an adjustment, that’s for sure. It’s also nice that both games take up very little space, so it should be easy to just toss them in the car with whatever else I’m carting out to Game Parlor.

* You know, I think we need alternate names for Lord of the Rings and War of the Ring. I’ve lost track of how many times I’ve been speaking to someone about one or the other and everyone involved has gotten confused about which we’re actually talking about. Maybe “Skirmish of the Ring” and “War of the Ring.”

Finally finished the Barracudas. These things took way longer than they should have to paint, and I’m not altogether pleased with them. I didn’t do nearly as good a job of prepping the resin miniature as I could/should have, and my wash/extreme highlighting combo is a lot of work for not a lot of payoff here. 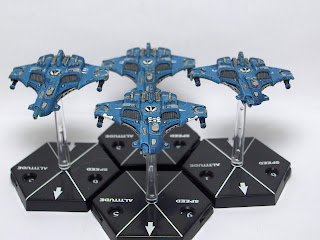 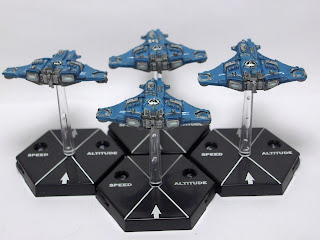 I also started in on my Haradrim. There’s still a bit more work to do with them: I don’t think I’m going about basing them the best way I can, and I think the skin and eyes need a bit more work/blending. For the most part, though, I’m happy with how the cloth is coming out. 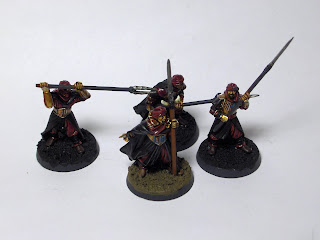 There’s a disconcerting lack of pictures here, and that’s really supposed to be the primary focus of this thing.

Still, this isn’t terribly surprising; I’m kinda-sorta in between projects. I’ve just decided to abandon my Tyranid army (to eBay, Batman!), have been waiting for War of the Ring to come out, and have been stunned and frustrated by actually playing Skaven in a local Fantasy escalation league.

So, in the interests of vomiting up painted content onto the shoes of the internet, I give you: some of the stuff I’ve painted over the past month or so:

I blew through 25 Stormvermin in a single week. I still really can’t believe I managed that. It was far, far more than I should have attempted because it contributed a great deal to my Skaven burnout. 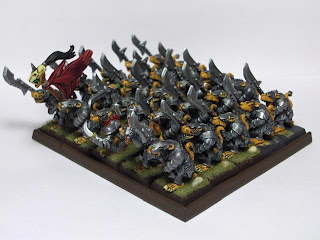 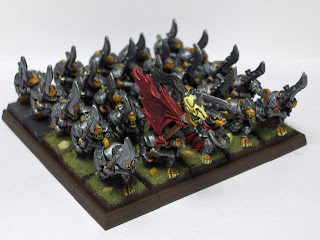 I just finished a fourth squad of Deathwing Terminators. This is one of my “Devestator” squads: nothings special save for the Cyclone Missile Launcher. 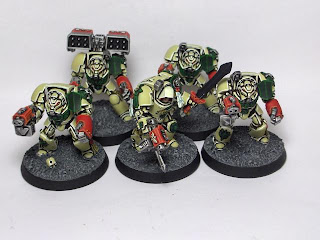 I also painted up a power armored Librarian in a day for a friend to use in my Rapid Fire Tournament. 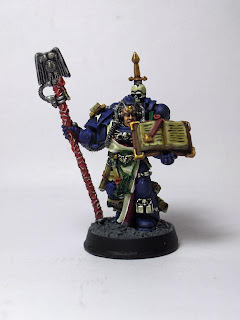 Next up on my to-do list are some Tau Barracudas (Barracudae?) for Aeronautica Imperialis and some Haradrim Warriors for Lord of the Rings/War of the Ring. 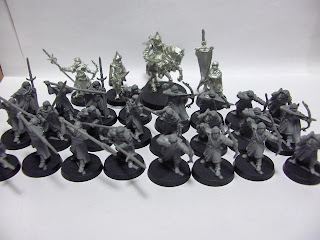 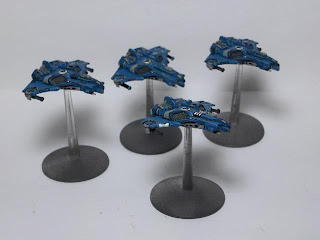